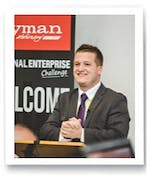 Ben grew up on a tough council estate and struggled academically due to having Dyslexia. Despite this, Ben had two businesses by the age of 21 and also managed to complete a foundation degree in Business Start Up.

In 2011 due to the tough economic climate Ben and business partner cousin Michael were forced to close their businesses and go bankrupt.

Undeterred, the pair battled back and launched The National Enterprise Challenge in 2013 and they have never looked back. Backed by high profile ambassadors Lord Sugar and Theo Paphitis the challenge is now the largest secondary school enterprise challenge in the UK with over 200,000 students having taken part. In 2016 the company received Angel investment and now employs 25 staff.

In 2017, Ben also co launched The National Skills Challenge with Natwest with the grand finals taking place at Natwest HQ in London in April 2018.

Ben speaks openly about the challenges faced due to bankruptcy, dyslexia and his difficult upbringing. He also talks about how he managed to persuade Lord Sugar and Theo Paphitis to back the challenge and how he and his cousin Michael have grown it to be the largest in the UK.

Ben was utterly professional throughout. He contacted me several times in advance of the event to clarify the purpose of the evening and what our intentions were in booking a speaker. Ben also arrived well ahead of the event to ensure that everything was set up as he needed.

Ben's talk was informative and engaging - at times funny, at times arresting, Ben delivered his address in an accessible and relaxed fashion, which many students and parents responded positively to. After the event, several people took the time to come and tell me how good he was. Certainly, his descriptions of dedication and perseverance in pursuing his business dreams provoked admiration and laughter from the audience and his closing sentiments were perfectly pitched to our audience and purpose. He is a very approachable and likable man, and someone whom I would certainly recommend to others."

"Ben spoke with sincerity and really engaged the students. With Ben still being young, the students really related to what he had to say, it was fantastic."