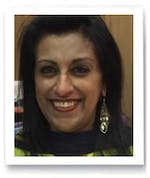 Bal has been advocating on the issues of BME women and men, on domestic violence, honour based crimes (forced marriage and female genital mutilation - FGM) and child sexual exploitation (CSE) since 2008.


Bal has developed and delivered training for front-line practitioners in Health, Social Care, Police, Education and the voluntary sector throughout England and Wales. She has been commissioned by Central Bedfordshire/Hertfordshire Council to deliver the Honour Based Abuse. More recently, she has also been commissioned by five London Boroughs and Suffolk County Council.

Suffolk Constabulary employed Bal for seven and a half years as their Project Officer for Honour Based Violence (Forced Marriage, Female Genital Mutilation) in a countywide Domestic Abuse Unit. She was responsible for developing policies, procedures and training for police officers and partner agencies to enhance the service to victims and potential victims for Honour Based Abuse/Forced Marriage & FGM. For three years she was based within the CSE / Child Investigation Abuse Unit. Whilst with Suffolk Constabulary, Bal trained on average 1,500 front-line practitioners per year.

Bal brings her own personal experience to her talks. She was taken out of school at 13, forced into marriage at the age of 17 and went back to education at the age of 26 after escaping from her forced marriage - and subsequently has been disowned by her family for over 20 years.
She is keen to share her experiences, be the voice of the victims and survivors who experience crimes rooted in the name of honour, whilst giving practical and emotional support. She raises awareness with agencies to reduce the isolation of victims and to increase reporting. She refuses to take her past into the future and regards herself to be an empowered survivor - in her words "my darkest past is now my greatest asset".

Bal was a volunteer with Karma Nirvana from December 2007 to December 2008 after reading Jasvinder Sanghera's book "Shame" and raised awareness with the Forced Marriage Unit during their roadshows around the country. Her experience is also featured in Jasvinder’s 2nd book “Daughters of Shame”.

She was nominated twice for the IKWRO "True Honour Awards" (2012 & 2014) and in October 2016, at the first BME Suffolk Business Awards, Bal Kaur Howard (BKH Training) was announced Winner of the Judges Special Award 2016. She also received a Nomination for the Business Person of the Year 2016 at the awards. Bal completed the Award in Education and Training Level 3 (formerly PTLLS) in 2014, followed by the College of Policing “Facilitator Training” for the Police Training Roles Learning & Development Programme (PTRLDP).

"Training exceeded my expectations because over the last fifteen years I have had, at least annual training in this field, including last month, but this has been vastly superior because of the passion and knowledge of the trainer"

"I don't really know what to say. Not only was the training very informative but your deliver was inspiring and passionate. I don't often leave a training course feeling like this - tearful and emotional. Thank you for sharing your story, the fact you are still standing amazes me. There is someone I can help in a different way now - I will make a difference to a child's life. Enjoy your freedom!"

"The most thought provoking training to ever experience. I've had the pleasure to undertake training with Bal previously and even again I've come away knowing more than previously. It really is nice to be on a workshop where the knowledge of the subject matter is second to none. I think I've been through a massive range of emotions just listening and watching today, and if I ever come across anyone dealing with Forced Marriage, FGM or Honour Based issues that I'll be in a good place to make a difference. Well done Bal. Thanks for sharing your story"

"I completed an FGM workshop on 10th May 2017, with my colleague Debbie Mitchell which Bal was delivering for Luton LSCB. Our purpose was to become more informed about FGM in order to cascade our learning in the form of a twilight safeguarding update for our staff. However, Bal’s delivery was so effective, in terms of her wealth of knowledge and working experience and her compassionate delivery of this sensitive subject, that we revised our plan and booked Bal to deliver a full INSET day for our staff.

Bal delivered an FGM and CSE workshop on our INSET day on 19th February 2018. Although it was extremely difficult to hear these messages, Bal delivered the workshops with a great deal of sensitivity and skill and was able to challenge and develop our thinking around these subjects. All attendees completed an evaluation of the training and without exception; all staff deemed the training to be excellent and felt more informed and equipped to safeguard individuals with a greater understanding in the future."