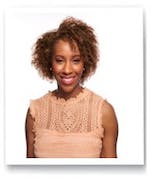 Criminal lawyer, children’s advocate, award-winning choir director, producer and singer-songwriter all in one!

Anu Omideyi is a non-practising criminal barrister who began her legal career in 2001 and paused it in 2014 when other areas of her life began to flourish. She ran a successful criminal practice spanning all areas of criminal law ranging from murder and serious violent and sexual offences to complex conspiracies to defraud from Furnival Chambers, a leading London set with nearly 100 members and 14 Queens Counsel. During this time she also sat on Furnival Chambers’ Board of Directors for 6 years - the youngest female and black person to have done so.

Regarding children’s advocacy, she founded the project Difficult Discussions Easy Songs which providesmusical resources for primary school children tackling difficult topics such as racism and protecting children’s bodies. She drew from her experience working with thousands of primary and secondary school children over the last few years and her passion for these sensitive subjects, born from experiencing and dealing with these issues personally, to create fun, child-friendly resource materials built around catchy songs and accompanying resources such as cartoon videos, karaoke material and lesson / discussion plans. Her openness yet sensitivity about her experiences; her criminal law, public speaking and music performance backgrounds combined with her warm and lively character have led to numerous public speaking - and musical - invitations to share on topics about protecting children and racism with young and older audiences alike. She is now in collaboration with the NSPCC, the Church of England, leading national safe-guarding law firm Farrar & Co and is in talks with other organisations to further the education, advocacy and protection of children.

As part of her musical journey Anu has managed, directed or produced many choirs of all ages, abilities and backgrounds nationally and internationally. She is currently producing an album of the Hillsborough Memorial Choir to commemorate the final celebration of the 1989 Hillsborough Football Stadium disaster. She tutors multiple choirs, singing groups and individual singers comprising every age, background and level of musical experience. She is frequently called upon to provide masterclasses or vocal training workshops to singers, groups and choirs at educational institutions and music academies and has directed choirs in Norway (Sangfesten, Grenland) and Paris (Paris Gospel).

Most notably, she managed, directed and produced the award-winning The Reapers Choir for many years and still works very closely with them. Under her leadership the choir was a finalist in BBC1’s Gospel Choir of the Year 2014, won or was nominated for several awards and performed in venues including 10 Downing Street for the Prime Minister, Kensington Palace, the Royal Albert Hall, the Royal Festival Hall, and the London African Music Festival 2015 amongst countless others.

The numerous leadership roles that Anu has undertaken in her life’s journey has brought her to a point where she is both privileged and humbled to offer advice, inspiration and motivation, be it in large gatherings or one to one.

"Anu was excellent and I would always be willing to re-invite her back to the school."

" The event went very well thank you, we would recommend her to others and use her again."

"Anu had a fantastic presence in the room. She was engaging, passionate and interesting. All the students felt at ease to ask her any questions and no student felt that they were asking “stupid” questions. Her greatest strength was being able to relate to the students and could describe a very complex, legal concept in a way that they could make sense of."

"I was impressed by her natural confidence and presence. She clearly has a secure sense in who she is as a professional and also personally in the interests she pursues outside of work. Anu was more than willing to offer her time to inspire our students with her personal journey as a criminal prosecutor and answer their questions for a careers master class held for our most able students."

"Anu has worked with our charity visiting many schools to give talks, raise aspirations and broaden career horizons in South East London, such as Deptford Green, St Matthews, Bonus Pastor, etc. Anu is a pleasure to work with. She is reliable and inspirational and a great role model to all."

"In the summer of 2015, Anu supported the BSS during our summer holiday school. It was a summer holiday camp for children aged between 4 – 12 years which ended with a Children's Gospel Concert. Anu gave inspiring talks to the children and held a music workshop with 33 children to prepare them for the concert. She taught them how to sing and perform dance moves to the songs. I was extremely impressed with her ability to grasp the attention of the children and keep them engaged and entertained throughout the workshop. Put it simply Anu brought out the best out of the children. Accordingly, I would recommend her to give talks to and hold workshops at schools."