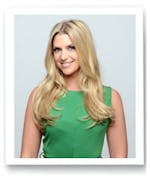 Anna shares her own personal stories of dealing with anxiety and depression, how she has tuned it into a positive experience, and shares her therapy based tips and techniques on how to take care of your own mental and emotional health - and your loved ones. Empowering, emphatic, youth centred (where appropriate), knowledgeable, with a little bit of well placed humour, best selling author Anna ensures her audience are inspired by her personal and professional experience. Her debut book 'Breaking Mad,' an anxiety busting guidebook published by Bloomsbury this year, became a number 1 best seller.

She first found fame with big hitting children’s television shows on CITV, Nickelodeon and the Disney Channel. However, away from her successful TV career and behind closed doors, she suffered from an almost crippling battle with generalised anxiety disorder. On speaking out about her experiences, she realised there was a huge stigma attached to mental health issues. To help fight and remove these stigmas, Anna joined mental health charity Mind as an official ambassador. Anna felt it was important to help others battle anxiety and depression, and since 2009 studied and qualified as a counsellor, life coach and Master NLP practitioner. She now runs her own private coaching practice offering those in need 1 to 1 coaching sessions.

Anna’s personal experience, expertise and caring nature have led to her own agony aunt column for teen magazine Girl Talk, and fitness magazine Top Sante, who recruited her to provide advice and support through monthly reader questions, regular Facebook chats and ad-hoc columns and features. She can also be seen speaking on mental health in schools, businesses and at corporate events, whilst also fronting online videos for the likes of AOL and Youtube to great success.

In 2014 Anna went on to take part in ITV’s celebrity diving show Splash! Where she swan dived her way through to the semi-finals, and became the last female standing in the competition. Following this Anna went on to front several weekly strands called ‘Ask Anna’, on multi award winning ITV daytime show This Morning. Due to the features great success, Anna has been invited back as a regular to join the team on This Morning, covering issues spanning mental health, family relationships, parenting, and has hosted phone ins on cases such as the Rotherham sex scandal.

2015 saw Anna explore her wild side hosting the Gumball 3000, a huge international motorsports rally. Alongside her co-driver Robbie Fowler, she spent a week fronting this tremendous sports race all the way from Stockholm through to Las Vegas, interviewing, and co-driving with the likes of Dolph Lundgren and Lewis Hamilton, and covering all things cars, fashion and entertainment!

As a highly credible source in the showbiz industry, with her own successful column in Digital Spy, Anna thoroughly enjoys hosting the red carpet premiers for the big blockbuster movies. Combined with her reputable media profile as a 'mind, body and soul' campaigner, Anna can also be found hosting her own radio show on talkRADIO every Saturday night; Later With Anna Williamson, a heady mix of showbiz, sex and relationships.

In addition, 2016 has seen Anna invited back to join Rylan Clarke on Channel 5’s Big Brother’s Bit on the Side, as their agony aunt and psychology expert. Along with joining the National Lottery team to host the Wednesday Lotto Draw.

Anna is very proud of her celebrity ambassador and national spokesperson roles for Mind, The Princes Trust and Childline. Recently she joined Ant and Dec for the 5th year running, to host the Princess Trust Celebrate Success Awards alongside HRH The Prince of Wales, and continues to use her expertise as a counsellor working with young people.

She is also a versatile voice over artist, and credits include Sony, GMTV, ITV, Channel 4, Nickelodeon, MTV and Living TV. Anna is currently appearing on 'Celebs Go Dating' on Channel 4 as an agent.

“We worked with Anna on the creation of a video for a children’s toy brand, alongside some child models. Anna maintained her energy and positive attitude throughout a long day of filming and our whole crew on site found her a pleasure to work with. She totally understood the messages we were trying to deliver and worked well with the kids on the shoot – a consummate professional whom we would not hesitate to recommend (and have done so to our other clients since!)”

"Anna has successfully hosted the Land Securities' Community Employment Awards for several years. She is always very professional but also brings fun and laughter to the awards as we celebrate those individuals who have overcome significant barriers to complete training and sustain employment.. Anna is engaging, emotive and witty and we love working with her year on year.”

"Absolutely amazing, I left feeling energised and with the feeling it's ok to talk about issues without feeling embarrassed or ashamed. Anna was so relatable and refreshing! More like this please, definitely the best Network event."

– Employee at Anna’s talk in the American Express Brighton Office

"Anna is a passionate speaker, drawing on her own experiences to explain how she has overcome mental health issues to forge a successful career in TV and radio, whilst also providing tips to attendees on how they can improve their own mental health. A post briefing survey of staff concluded that over 95% of those attending felt better informed about mental health, having listened to Anna”