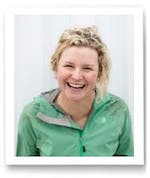 Inspiring tales of adventure shared with honesty, humour and passion!

Anna McNuff is an endurance athlete and adventurer. Named by the Guardian as one of the top female adventurers of our time, Condé Nast Traveller also recently included her in a list of the 50 most influential travellers in the world. She has also been named by the Lord Mayor as one of the City of London’s top 50 most inspiring people, and is one of The Discovery Channel’s ‘Make Your World Bigger’ Champions.

The daughter of two Olympians’, Anna grew up in a family where the pursuit of physical and mental excellence was encouraged. Seeing the respect and admiration that her parents received led to her harbouring ambitions from an early age to be an Olympian herself. As a middle sibling sandwiched between two brothers, she simply did what the boys did, and often better.

By aged 16 she had taken up the sport of rowing, and went on to represent Great Britain. During her time in the Great Britain squad, Anna became a World Champion at the University Games in 2006, and won a Bronze medal at the 2007 European Championships. Dogged by injury in her twenties, Anna made the difficult decision to retire from the sport and to let go of her Olympic dream. She then embarked on a new life as an adventurer - darting around the world on the hunt for new and exciting endurance challenges.

From primary school age to those approaching graduation, Anna has shared her passion for adventure with over 10,000 children in the UK, Europe, USA, Australia and New Zealand.

Through Anna’s talks, students will be encouraged to greet new challenges head on, and to view each one as an opportunity to learn and to grow. They will feel empowered to push fear and doubt aside in the pursuit of uncovering their full potential. Above all, they will learn that the difference between leading a comfortable life and one that is truly remarkable, is entirely within their control. And that with a little humour, a pinch of perspective and the right motivation, truly anything is possible.

“She won over the year 11 crowd from the moment she bounced onto the stage! She is a fantastic role model for young women; her enthusiasm and confidence are inspiring. Anna really engaged with the audience with a fun and genuinely fascinating presentation. The Year 11's loved the way she spoke to them with such energy, making them feel like they could do anything.”

“Great motivational speakers are hard to find. Anna was absolutely fantastic - infectiously positive, and with a real story to tell. Exactly what the kids needed as they head into taking their GCSEs.”

“I was so inspired by your talk. It helped me realise that we are all made for bigger things than we think we are. I’m not exactly sure what I’d like to do when I’m older yet, but after listening to you speak I just know that I am now super motivated to work towards doing something meaningful with my life.”