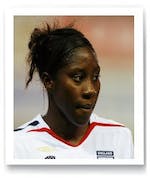 With 71 caps international caps under her belt, including competing for Great Britain at the 2012 Olympics, Anita is a hugely prominent figure in the footballing world but also has a great story to tell off the pitch.

Anita Asante is a former England defensive midfielder/ centre back who currently plays for Aston Villa in the FA’s Women’s Super League (FAWSL).


With 71 caps international caps under her belt, spanning 14 years, including competing for Great Britain at the 2012 Olympics, Anita is a hugely prominent figure in the footballing world.The 35-year-old made her England debut in 2004, and she went on to compete in two Football World Cups and three UEFA European Championships. Anita also kicked off the first ever women’s Olympic football match for Team GB at the London Olympics in 2012.

Anita has also played top-flight club football for Chelsea, where she most recently won the WSL title in 2020 and the FA Women’s Continental Cup, as well a successful stint playing football in the USA and Sweden where more domestic honours came.Away from the pitch, Anita enjoys talking about football and women’s sport, working for media outlets such as the BBC and Sky Sports. She is also a passionate ambassador for Show Racism the Red Card, the UK’s anti-racism educational charity, and Amnesty International UK.

She is an excellent speaker, and is well qualified to share her experiences. Whether it’s talking about leadership, overcoming adversity, diversity, equality or being a prominent figure in the challenging world of a male dominated sport, she has a story you want to hear.

“Anita spoke at MAD//Fest 2019 and was inspirational, candid and engaging. Her background in professional sport added hugely to a discussion at a marketing event on daring to be different and breaking boundaries. The feedback on this session was amazing and I couldn't recommend Anita enough!”

“Anita was a great fantastic addition to our FA Pride Inside 2020 panel event in June. Anita’s experience as an elite athlete provided an amazing insight from not just a performance perspective, but importantly specifically on how that intersected with elements of her identity. She facilitated in the successful delivery of a very informative and authentic panel.”

“Anita joined our final Festival of Football panel in July 2019 and was such a valuable participant. A passionate advocate for equality and anti-discrimination, Anita is an incredibly knowledgeable and eloquent speaker. Anita’s strength is in being able to articulate powerful and original thought in an accessible and engaging manner."