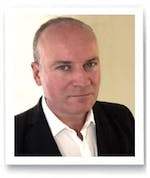 Former broadcaster and journalist who is one of the UK's best known communications, leadership and media expert

Andrew Wright started his career in the TV industry working in some of the world's most dangerous countries, and came under fire during the Siege of Sarajevo in 1992. As well as an Employer and Skills expert he is as an award winning broadcaster, journalist and producer for the Radio and Television industry, He launched his own media company in 1997.

Andrew is a communication specialist. He has spent 30 years travelling the world working in the media, experiencing other cultures, and helping people of ages to be better communicators. He believes that creating understanding between people is crucial.

His work in every environment from presenting and producing live TV and Radio studios, to reporting from war zones, to speechwriting for high profile figures, and building 2 business from scratch, has given him enormous experience which he now brings to schools throughout the UK. Andrew’s seminars, talks and workshops are always incredibly insightful, engaging, empathetic, and memorable.

He brings a wealth of stories and experiences from his travels and adventures, using them to deliver ideas about skills and approaches to coping with life’s challenges that students find compelling and authentic.

His key topics are:

"Andrew has a natural flare for public speaking and engages all students in his workshops and talks. He creates an atmosphere which is light, but pacey and makes his subject accessible for all levels. Every time he has given a talk, he has a small crowd of students gathered at the end to talk to him further. This is a testament to his ability to inspire and engage with students. He has often spoken to students two years in a row and when they see him for a second time, they are always excited about what he will offer them. He is always very prompt in responding and has gone out of his way to assist me. I whole heartedly recommend Andrew."

– Catriona Rees, Head of PSHE and RSE, The King’s School