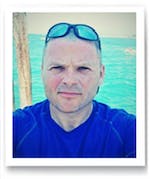 Andrew discusses his travelling experiences in Europe, which inspired his love for writing.

Andrew P. Sykes is a writer, cyclist, speaker and teacher. He’s also a lover of those quirky, humorous travelogues that meander comically from one minor adventure to the next. So writing about a long-distance cycling trip across Europe from southern England to southern Italy seemed the natural thing for him to do once his small-time odyssey was over.

The book, 'Spain to Norway on a Bike Called Reggie', will be published by Summersdale in Spring 2017. Andrew has now returned to his northern roots and lives in the beautiful Calder Valley of West Yorkshire, the area where he was born and brought up. He currently mixes teaching with writing and, of course, dreaming of the next long journey.

"Andrew was a very nice chap and I was looking forward to hearing his speech. Some colleagues, who were particularly interested in the topic, found it really interesting and former students did appear attentive."

"Andrew Sykes not only has a fascinating story to tell, but he also possesses the rare ability to captivate and activate his audience. Seldom have I seen my class so genuinely interested in a visitor to our school. Mr Sykes was able to call on his years of experience of classroom management to ensure a well-ordered and varied interaction with the class. Inspirational and thoroughly recommended!"

“When the Tour de France came to Yorkshire (and Ripon), Andrew was high on our list of speakers for our cultural festival at Ripon Cathedral. His humorous and interesting adventures around Europe were extremely well received, inspiring many in the audience to believe that cycling adventures were there for the taking. Andrew has a very open, flowing and engaging style, making the audience feel at ease, relaxed and as if they are listening to a friend, always the sign of a good author and great speaker. Would we book him again? In an instant!”

“Andrew is one of the most entertaining presenters we have had the privilege to invite to an event. He gave a very descriptive and entertaining talk about his travels around Europe as part of his book tour to a varied group of cyclists and non-cyclists. Everyone who attended enjoyed the presentation and I have never experienced so many people eager to ask more questions and engage with the speaker than with Andrew’s presentation.”