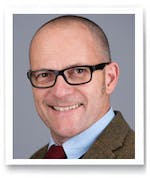 Andrew ‘Bernie’ Bernard delivers his ‘Rule of Thumb’ workshop in which he shares the painful story of his sister’s murder in 2012 at the hands of her partner.

Andrew ‘Bernie’ Bernard (Bernie to everyone except his Mum) has been a professional speaker and workshop provider in schools, colleges and businesses since 2005. His specialist subjects are Enterprise, Creativity and ‘Talking Balls’ (he is a testicular cancer survivor). He is an accomplished and professional speaker and in 2014 was awarded the honour of Fellowship of the Professional Speaking Association. (The PSA).

Rule of Thumb is his tribute to his sister, Sarah Gosling, who was lost in 2012 after over two years living with a violent partner. Sarah’s is a tragic and all-too-familiar story of domestic abuse and violence who, despite offers of support and safety, was determined she could live with and change her partner’s behaviour. Sarah’s killer - Ian Hope - is currently serving 17 years for her murder after being found unanimously guilty.

As well as telling Sarah’s tragic and moving story, Bernie works with students to open their eyes to abusive behaviours and patterns, how domestic violence is portrayed on TV and in music and films, and asks what they could do change the future of domestic violence.

Some of the proceeds of the workshop are donated to Refuge, a charity supporting some of the 1 in 4 women who are affected by Domestic Violence in the UK.

Bernie was an average student who got average GCSE grades and disastrous A levels and drifted through a number of unsatisfactory jobs until he had a breakthrough in 2005...when he ‘woke up’! After 17 years in the wrong job(s) he realised that his vocation lay in working with young people to develop their personal skills, resilience and enterprise attributes.

“Bernie was superb, creative and engaging. Many students felt he would make an excellent teacher. I can’t wait to invite such a dynamic, organized and life-changing person back into school!”

"Bernie spoke at the student's level, very entertaining, yet a serious note, good up to date examples – made the future very relevant to them. This was a clear message about making plans for the future"

"'Best speaker we have had all year’, ‘He was funny and entertaining’, ‘He made me think about making plans for the future"

“In a word, inspirational”

"Just wanted to say many thanks for a great performance last night. Everybody really enjoyed it. I have been hearing from the team this morning just how many young people said they enjoyed your presentation. Thank you"