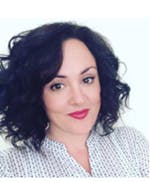 Vanessa is a successful mindset & business coach, author, and public speaker. She shares the lessons she has learnt from overcoming life changing personal circumstances at the age of 11, which was followed by a prolonged period of vicious bullying.

When Vanessa was aged 11, her mother and grandmother both died within a year of each other. Soon after, Vanessa was targeted by bullies who threatened to scar her face and made her frightened to go out. For some people, when life knocks them down they learn to be resourceful. They turn their most difficult times into their most powerful lessons. Vanessa is one such woman. She has pushed through her own experiences of loss, grief, fear and insecurity to help audiences live their best lives now, to let go of the judgements of others, find their voices and tell the stories they carry that have previously gone unheard. Vanessa has the ability to tell her personal story in a moving but ultimately uplifting way, and can also provide a range of exercises to get her audience interacting and engaging in the same way.

Prior to becoming a mindset and business coach, Vanessa enjoyed a successful 20 year career in PR and marketing. During that time, she worked with some of the UK's most highly respected companies and counted global retail businesses among her clients. In addition to helping reinvent some of the high street's biggest brands, she has given interviews on live radio and TV, worked backstage on one of the UK's biggest, boldest and most fashionable breakfast television shows. She's been the CEO's first call at times of corporate crisis, rubbed shoulders with world famous boy bands and TV stars, spent time lobbying government ministers and even organised a photo call for a Prime Minister's wife. Aside from her corporate background, Vanessa is a trained relationship counsellor and NLP coach. She is also a published poet and novelist.

She has run her own offline and online businesses and now has a global following of female entrepreneurs who want to find their voices, create their best lives and who look to her for inspiration and life transformation. In 2016 Vanessa was appointed as a Business Adviser for the Government's Young Enterprise Scheme, helping young people start and grow profitable businesses. She is 40 years old and a married mum of four children aged 7-17yrs. She runs her coaching business from her home in Cornwall.

"Vanessa showed herself to be very adept at holding the interest of an audience and has an easy and endearing manner that keeps you listening and concentrating throughout. What shone through the most for me was her level of empathy with her subject matter and her ability to convey those feelings to the listener in such a way that you could really get a sense of the emotion and meaning behind the words. Vanessa has a very disarming manner about her in the way she approaches and interacts with the audience that came across at just the right tone. There were some very searching questions asked after the talk which were met with equally thoughtful and well-structured responses."

"I invited Vanessa to our school to inspire our children and for them to meet and work with a published author. The experience opened their eyes to a world of possibility. So often, children can become fearful of failure. However, Vanessa's activities alleviated that pressure. Her ability to work with a range of age groups was seamless with every activity attuned to each age. Perhaps the most significant outcome was the pupils disappointment when their session ended; every teacher's dream! I would highly recommend Vanessa."

"Vanessa is extremely good at relating to the girls she works with through the Young Enterprise Scheme and has quickly earned their respect and trust. She has an engaging, open and warm style which when coupled with her professional knowledge and organisational skills has made her an outstanding mentor for the girls. I have been particularly impressed by Vanessa's light touch, guiding the team where necessary but also leaving them with space to develop their own ideas and make their own choices."