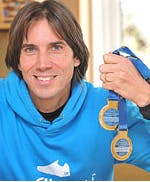 Twice World Champion, Steve Judge’s story started when he was told that he may never walk again following a near fatal car accident. Steve didn’t lean on his excuses but instead set goals and worked towards them with drive, motivation and commitment. Through years of rehabilitation and training he eventually represented Great Britain as a disabled athlete and achieved World Champion status in Paratriathlon (swim, bike and run).

Steve enjoyed a happy time at school gaining sufficient GCSEs to start his apprenticeship to become an engineer. Studying at college and working practically in the workshops and down the coal mines of Yorkshire Steve qualified as an engineer. Steve’s active life enabled him to participate in various sports and numerous outdoor adventurous activities with the Scouts gaining fun, enjoyment and a passion of setting goals and working towards the achievement. Out of all the sports his main love was running and he did this with passion.

In 2002 Steve was involved in a near fatal car accident and due to the extent of his injuries from both of his crushed legs he was told that he may never walk again. Having to grow the bone back in his leg by 100cm and years of rehabilitation Steve ensured that he had no regrets and turned any excuses into challenges enabling him to stand again and walk again. Continuing to push himself with his optimistic approach to life he set further goals in swimming, cycling and eventually in the disabled sport of Paratriathlon. Steve achieved highly in the sport becoming the British Champion and two years later the European Champion in his category.

As a disabled athlete Steve represented Great Britain in many events around the World and achieved many accolades including two times world champion in 2011 and 2012. Steve now has a new goal; to share his story so as to inspire others and to motivate many so that the pain and suffering that he has encountered will not have been in vain. As an established international and motivational speaker Steve now shares his journey and his messages around the world.

Steve carries out presentations to Schools and businesses all over the UK and has recently returned from a successful tour in Mexico. His keynote presentations and workshops are adapted to each specific audience raising aspirations, motivation and PSHCE suitable for young people of various ages and backgrounds. His performance can cover many ‘keystage’ areas and also be used in ‘Enterprise’ days for CPD training for the teachers. The content can be a presentation or a workshop style which is more interactive and encourages audience participation, getting the pupils or staff to think about life goals and routes by which they can work towards them and achieve. Steve always leaves follow-up ‘goal setting’ work which he will pursue on at a later date which makes your budget go further as there is a longer lasting impact.

Ideal for award nights with a presentation, giving out of awards and the opportunity of seeing the medals and getting ‘selfies’ which the pupils and also staff really enjoy. Contact us for more details; you won’t be disappointed with Steve’s work. Steve’s optimistic outlook on life is shared in his various messages as he states: “Things happen in life, it’s how you deal with it that matters”.

"Steve did a good talk on his life journey and his book. It went down well."

“Thanks ever so much for coming to our school and inspiring the kids today. Your inspirational speech was warmly listened to; in fact I’ve never heard them all so quiet and gave us food for thought. Absolutely astonishing. After seven years of pain and determination. A marvellous demonstration of human body to overcome adversity and achieve great things, when the heart and mind are willing and the attitude is so positive and vibrant. Truly life-affirming. You enabled everyone to think about short and long term goals and make us feel anything is possible. They absolutely loved it and haven’t stopped talking about your journey and as a school we have talked about your motivational messages that you mentioned. Thank you very much for taking your personal time out and coming to our school.”

“Thank you wholeheartedly for agreeing to come along to talk to our students. Although I know you must have heard it many times before, your remarkable story is an inspiration, not only to our students but to everyone who has had the opportunity to meet you and to listen to the incredible journey you have been on. Thank you once again for giving up your valuable time, it was an honour and a privilege.”

“Simply Steve, you made the evening with your inspirational responses to the questions I asked you. The audience were spellbound and the standing ovation was very justified. Showing your video at the end reminded the players of when they first saw it just before they went to Wembley to win and they have mentioned that listening to you talk has confirmed all of their initial beliefs in you. There was not a dry eye in the house and we all aspire to fulfil our lives and work towards our goals like you have done. Thankyou”