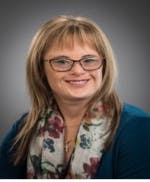 Sheri is the only person with Down syndrome who is a qualified teacher in the world.

Shéri has just been offered an ad hoc position at the University of the Free State. She will assist the different role players in a project, to help disadvantaged schools in the Free State. Shéri will address the learners and staff of these schools and try to motivate them to reach their full potential. She is currently also a full time qualified assistant teacher at a Pre-primary school for learners with special educational needs and she presents motivational speeches all over the world. Shéri strives to change negative perceptionsabout people with Down syndrome and she actively advocates for the rights of all people with any disadvantage to be granted thesame opportunities they would have had, if they were more privileged. Although she is intellectually disabled and was educated in the Afrikaans language, she was determined to learn to speak English to be able to reach more people with her story of hope. When she grew up there was little to no support in the form of therapy, etc. available in South Africa.

Shéri is a member of the Presidential Working group on Disabilities of South Africa. She has also been invited to be an ambassador for National Casual Day. A full feature was done on Sheri by the international magazine, Kids Nation Magazine, in two consecutive years. She has also been featured by Down syndrome international, on their web page. Sheri was featured in an article in a paper in Scotland: Thereworld (UK) and in a Melbourne newspaper, The Age, in Australia.

Shéri wrote a book about her life and the manuscript was accepted by the LuxVerbi Publisher and the book has been launched internationally in English and Afrikaans. Sheri is currently the presenter of her own radio show, MEDFM, in Bloemfontein. She invites her well known guests to tell the listeners about themselves and the work they do.

"I was just emailing to say how much I enjoyed that assembly. That was honestly one of the best speakers I have seen in my 7years at Lord Wandsworth College. A truly inspirational person and a lesson to everyone in overcoming adversity."

"'Against All Odds' has been given an opportunity to play on ETV (a South African TV channel). We have selected our most inspiring stories to play at 21:30 on Tuesday 28 May 2013. Sheri’s story will be the leading story on the program. Feel free to watch it again or inform those who may have not watched the initial episode. Sheri has inspired thousands of South Africans and so have you. We received multiple emails of parents who thought that their children had no hope of a future and resorted to isolating them and keeping them away from society. After they saw the episode of how you encouraged Sheri they have changed their entire perceptive on their children with Down syndrome and are taking the Suzette Brynard approach. God bless Sheri and all her future ventures."

– Dzivhu, TV Presenter, Against All Odds

"You have not seen resilience until you have read this uplifting story of an extraordinary young South African. Born with Downs Syndrome, Sheri Brynard defied all odds by achieving a teaching qualification and becoming an international ambassador on behalf of those with this genetic condition. The book is also a heart-warming account about the loving relationship between a mother and a daughter as they face down the challenge of Downs syndrome. Their story inspires and educates at the same time, and makes one’s own struggles pale into insignificance. Read with a full tissue box at hand."