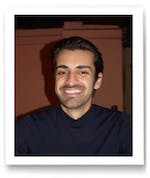 Shammi knows all too well about not fitting in. As a child, he felt like an outsider – different to the other boys in school. He didn’t enjoy sport, hated football, and his voice hadn’t broken till he was much older than his peers (often being confused for his sister’s whenever someone called the landline). So he grew up questioning if all of these characteristics made him any less of a man. In the eyes of society, did he behave and act like a man was supposed to? What did it even mean to ‘be a man?’

It is this question that has built Shammi’s campaign on re-defining masculinity for young boys and men so that they can live freely outside the confines of the ‘man box’: the pressures put on boys and men to behave a certain way, which drives 84 men in the UK to kill themselves each week (three times that of women). Having battled bullying in his early years, then depression in later life, Shammi has fought hard not to fall victim to this statistic. He’s defied society’s expectations in order to define his own masculinity.

He now encourages others to do the same. He helps young boys and men to step outside the 'man box' by encouraging them to: (1) think critically about their perceptions of 'what it means to be a man' today; (2) question why certain types of masculinity are dangerous, damaging and harmful; and 3) form their own definition of masculinity that is progressive, positive and drives social change.

Shammi believes that talks are only as engaging as their audiences are engaged, which is why he tries to use – where possible – a conversational approach when addressing students. His most successful talks are ones where students feel involved, fired up through debate and discussion, and able to express their beliefs without judgment or fear.

Featured in HuffPost (formerly known as the Huffington Post), Shammi’s writing has also served as a basis for many teachers looking to integrate the gender debate in students’ cultural learning. Shammi provides an experienced voice on the subject of masculinity, driven by a mission to inspire the next generation of forward thinkers, leaders, and believers looking to level the playing field for boys and girls, men and women everywhere.

"We’re living in a climate where young people’s mental health and self esteem is becoming increasingly important to their education. I approached Shammi to turn the relatively contentious topic of gender into one which was accessible, relevant and captured the attention of young minds – and I’m so glad I did. His vocal style and natural affinity with students was obvious from the outset – I’ve never seen them (especially the boys) open up like they had done during that session. As they prepare to go to uni and begin to ‘find themselves’, I don’t think the talk could have come at a better time. Kudos, and thank you, Shammi."

"The success of Shammi’s talk was driven by the fact that he didn’t talk ‘to’ or ‘at’ students – he talked with them. There were times when you could hear a pin drop, and times when the students were so absorbed by the discussion that it was pleasantly difficult to calm them down! A truly captivating session and lesson in breaking gender stereotypes and being your whole, authentic self. Young boys need to hear this as much as girls, and I’m glad someone like Shammi is spreading this message. I can’t wait to have him back for the next cohort."

"Shammi’s calm and friendly demeanor made him an instant hit with the students. He created a completely safe and open environment for them where no opinion was wrong or judged. Even the more typically shy and reserved of the bunch had a lot to say on the topics. They left the session with renewed thinking, empowered to define gender on their own terms. Inspirational, educational and progressive – thanks Shammi!"