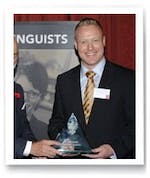 Multi-award winning motivational speaker who specialises in wowing students and teachers alike about the importance of learning languages and how!

Paul is a multi-lingual (Russian, Arabic and Pashto) former Royal Air Force Air-crewman and now Managing Director of his own Research Company. During his military career he predominantly served on operations that concentrated on the Middle East, North Africa and Afghanistan; including a high profile secondment to the United Nations Special Commission (UNSCOM) in Baghdad as a Weapons Inspector and Interpreter.  His wide array of experiences coupled with a joie-de-vivre and an embracement of other cultures has permeated institutional barriers and preconceived ideas on religion and race.

A dyslexic who loathed school, his life story is a powerful and emotional campaign to succeed. To date he has spoken to approximately 45,000+ pupils, students and teachers from a myriad of schools and universities that encompass the majority of the UK; focusing on what the Dept for Education terms as “non-achieving schools” within multi-ethnic low-salary demographic areas. He is also a popular international inspirational speaker for corporate events and high profile clients include Rolls Royce, GCHQ, UK Trade & Investment, British Aerospace, Boots, ITV and Thales.   His speaking themes include: overcoming adversity , diversity awareness and team building , driving objectives , change and change management , motivation , mental preparedness , anti-bullying and life-long learning  .

The talks encompass his school years and the learning difficulties he had at Secondary School in the Rhondda Valley; to his first few jobs in Cardiff and the subsequent experiences of working with people from other religions, races and sexual orientation; concluding with his career in the RAF, modern warfare, humanitarian aid, diplomacy, globalisation, social media and the lessons that life has taught.

"Paul’s talk was FABULOUS! We really enjoyed it and it was so relevant to our staff and students! We will be looking to book Paul again."

"Really good thank you. Was interesting and the students were quite engaged. I think it was good for them to hear the stories Paul told and made them appreciate the advantages languages can give them."

"Paul is probably one of the most energetic and charismatic speakers I have ever heard and the girls were gripped. His use of humour and great personal experiences really helped to inspire them about languages. Some feedback suggested he was the favourite part of the day for some."

"Just wanted to get in touch to say 谢谢 again for yesterday. It was great to meet you and the pupils loved hearing what you had to say. Just what we wanted.

All the best with everything. Never stop! (not that I need to tell you that!)"

"Thanks for an entertaining and inspiring talk yesterday! Absolutely brilliant as per usual... I've asked for some feedback from the students. It's all very positive."

"The feedback has been absolutely fantastic. He spoke for over an hour in the end and Sadie tells me that every single student was captivated for the whole time. They even stayed when the bell for lunch had gone to ask questions!! Staff have also given fantastic feedback; one of the Science teachers wants to learn a language as a result and a parent emailed in to say how much her daughter had enjoyed it as she literally could not stop talking about the talk. She said she and her husband are very jealous! We are currently looking at how we can hopefully run the whole event, including Paul’s talk, again next year."

"President Barack Obama was so impressed after a meeting with Paul that he wanted a photograph taken with him!  He has amassed such a following and four major national awards (MOD Peoples Award for Inclusivity; Chartered Institute of Linguists David Crystal Award for Fostering the Study of Languages; Business Language Champion Ambassador Award and Linguascope Language Personality Award) that any spare time he has in his very busy work schedule is taken-up with requested speaking events; of which there is now a waiting list of eager customers."

“I wholeheartedly recommend Paul as a truly motivational speaker.”

"It was great to meet and hear you speak at Reed's today. Can't think of a better person to address our pupils on a cold Monday morning in January. You made a great impact and there was a lot of positive talk from students and teachers. You were a big hit with the ladies from learning support!"

"Thank you again so much Paul, that was fantastic. I wish we could sit and listen to your stories all day!The pupils were truly captivated and if that doesn't encourage them to not give up on languages, I don't know what will! Thanks again for agreeing to do the session twice as well so that all our year 9s could listen to you.”