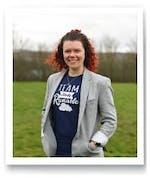 Inspiring talks and empowering workshops from a solicitor-turned-entrepreneur; using running as the tool to build confidence in sport, exercise and life. Doing more than you think you can.

Natalie Jackson founded her first social enterprise company in 2015. With a background as a solicitor and a “lucky” place in the London Marathon, non-runner Nat had had 6 months to learn to run, completing the marathon in 5 hours, 56 minutes and 41 seconds and raising thousands of pounds for a local hospice. What she learned was that she could do more than she thought she could. Leaving the law shortly after to found and direct Totally Runable Ltd, Nat has since been passionately, and effectively, sharing that message. We can all do more than we think we can.

Along with the organisations that she has co-founded (Totally Runable Ltd and See Sporty Be Sporty CIC) Nat works with pupils and staff using running, passion and humour to empower and inspire others to do more than they think they can. With a specific focus on inspiring girls in sport, Nat tells the story of her own experiences of sport (“keen”, if not very confident or skilled), starting a business (not unlike running a marathon), and creating the world and life you want to live in. She uses real statistics and stories about the messages that girls (and boys) are sent about gender and sport, with real empathy and support to help inspire bravery and change mindsets.

Totally Runable Ltd is a social enterprise company working with schools across the North of England to help measure and close the Gender Sport Gap. 800m Team GB star and Olympian Jenny Meadows joined founders, Olympian and former UK number 1 sprinter Emily Freeman and Lawyer-turned-runner Natalie Jackson in 2019. The Totally Runable Team use running as the tool to build confidence in sport, exercise and life, with workshops and courses mixing running with mindset training to empower and inspire; talking with girls, boys, children and adults, about gender and sport. Since their first school-based courses in 2016, the Totally Runable Team has worked with over 3000 pupils and staff, helping schools to measure and work to close their Gender Sport Gap. They are currently working in over 40 schools across the North of England, and counting. Over 300 schools have signed up to Totally Runable's Girls and Sport Pledge, giving schools who want to be "doing more for girls in sport" free support, guidance and resources. From humble beginnings around a kitchen table in 2014, Totally Runable Ltd now has a team of staff and volunteers, including current and former elite athletes, to help run workshops and courses, acting as awesome role models for pupils and school staff as well as providing a pathway for retirement from sports careers.

'The feedback at the end of the workshops was excellent from both staff and pupils and the children demonstrated that they had developed their understanding over the day. I would highly recommend Natalie and Totally Runable to any schools or groups wishing to engage in their workshops.'

'Nat is truly inspirational. Her energy, passion, and positivity are infectious and are underpinned by strong beliefs. She wants to make a difference to children and young people, and does so ethically and with clear moral purpose.'

'Nat is passionate, enthusiastic and always brings fun and enjoyment to her talks and workshops. Having worked with Nat and with Totally Runable over a number of years I can feel the difference in our pupils and staff. They are more confident, both in and out of sport, and there has been an impact on pupil attainment over the same time period which I don’t think is a coincidence.'