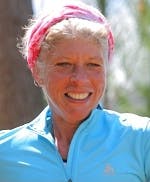 One of the top female Ultra runners in the UK, running distances in excess of 100 miles and a multi World Record Holder.

Mimi Anderson was born in Singapore to an Army family in 1962. In 1971 she was sent to boarding school where she enjoyed participating in team sports such as hockey, netball and rounder’s. At the age of 14, Mimi suffered from anorexia which stayed with her on and off for the next 15 years. Now married for 28 years, with three grown up children and two grandsons, her running has gone from strength to strength.

In 1999 she took up running and literally had to teach herself how to run. She started on a treadmill, eventually venturing outside and taking part in a few races up to the half marathon distance. In 2000 a friend suggested that she enter the Marathon des Sables, this is a 250km 7 day self-sufficiency staged race in the Sahara Desert, and Mimi couldn’t think of any reasons why she couldn’t enter this challenging race.. In 2001 she ran the Marathon des Sables as part of a team, and although she was extremely ill during the race she did complete it. On returning home, she remembered thinking that if she could complete what was supposed to be the “toughest footrace in the world” feeling ill, what could be achieved feeling 100%?

Mimi’s races have taken her all over the world and if there are no events that catch her eye she will organise her own challenges. She has achieved three World Records, two of which are running from the top to bottom of the UK and Ireland, smashed course records and has proved that in the Ultra running world women can be as good if not better than the men.

"Mimi Anderson’s talk was very inspiring and was very interesting. Her presentation was very well laid out and she managed to captivate the audience. The pupils were engaged in her presentation and enthralled by her level of achievement. I would highly recommend Mimi for speaking within Schools."

"During May 2011 Mimi Anderson gave two extremely interesting and inspirational talks focusing on her achievements in the world of ultra-distance running in our school. The first was focused at upper Primary students and the second at Secondary students. Both talks were highly interesting, dynamic and delivered with the age group of the students in mind. The students found them interesting and moreover inspirational, particularly the girls who are used to seeing male sporting role models and less so female ones. In particular, for some of the girls this gave them more confidence to “go out on their own” and was particularly relevant to the students following the International Youth Program (international version of the Duke of Edinburgh award) that we have running in the school.

The talks were accompanied by a spectacular visual presentation that captured the imagination of the students. I can only highly recommend these talks to students of school age between upper Primary and Secondary."

“Robertsbridge Community College were privileged to host Mimi as guest speaker at our GCSE presentation evening in November 2011. I can honestly say that Mimi was one of the most inspirational speakers we have had at the College and it was a joy to see the audience sit wide-eyed and open-mouthed as she told of her running exploits and how she had overcome adversity to enjoy her many triumphs. Her talk was accompanied by a spectacular slideshow and she entertained us all with a keen sense of humour which, sadly, you cannot always rely on when inviting in guest speakers. Mimi was engaging, warm and friendly and her talk courted such interest as to merit an article in our now famous College newsletter. She stayed to socialise with students and parents after her talk and will always be a welcome visitor to our College. I would have no hesitation in recommending Mimi to any public event and hope she will be returning to our College soon.”

"Mimi is an old friend of mine and hearing her talk about her extraordinary ‘other life’ as an extreme marathon runner and athlete always left me lost in admiration. I felt that my pupils would benefit from hearing her story and so, in 2007, after she had completed the 352 mile Arctic run, I invited her to come to speak to a group of about 200 students, staff and parents. Mimi was a huge hit. She spoke from the heart about her life, what it is to feel driven to take on these challenges, what it feels like to take part and what it feels like to finish. The Arctic challenge was a particularly riveting account and the entire audience was mesmerised, not least when Mimi invited one of the students to try on the backpack she carried with her. It was a fascinating evening and, of course, since then Mimi has taken on even more exceptional challenges and has even more to tell. I recommend her highly."