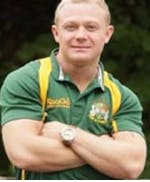 'Commando Joe' Fun and Fitness for everyone! No student left behind.

Commando Joes is the brainchild of former Commando and army personal trainer Mike Hamilton. The organization was founded in 2009 and has quickly established bases across the UK. Endorsed not only by the hundreds of schools who sign up to their fitness and curriculum sessions - but also supported by police forces, councils and NHS schemes.

The only company of it's kind in the country, offering specially tailored military-style fitness and team building to students, Commando Joe's has built up a strong track record of instilling discipline and fighting exclusion in some of the country's hardest to reach schools. Their team of ex-armed forces instructors, with our community wide schemes, are reaching out to around 50,000 students to date.

Commando Joes started off in some of the most challenging schools in Manchester, it's been no mean feat. Mike is used to a tough challenge - having serves as part of an elite bomb disposal unit on the front line in Afghanistan and Iraq, considered to be one of the most dangerous jobs on earth. Now he's determined to wage war on rates of childhood obesity and education inequalities as part of his latest venture.

Combining his personal training expertise with the team-building and survival skills he learnt as a Commando to create a unique scheme for schools.

Available as full and half day sessions.