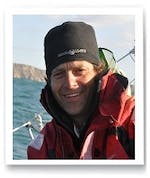 Captain of the first and only rowing boat to have successfully crossed the North Pacific Ocean from Japan to the Golden Gate Bridge, a voyage of some 7000 miles.

Mick Dawson is a former Royal Marine Commando and a professional yacht Captain. He has successfully rowed across the Atlantic Ocean twice and in 2009 Captained the first and only rowing boat to successfully cross the North Pacific Ocean (The Everest of Ocean Rowing); from Japan to The Golden Gate Bridge in San Francisco.

Film-maker and adventurer Mick's epic 7,000 mile crossing of the North Pacific with his friend and rowing partner Chris Martin was featured as a Discovery Channel Documentary ‘Rowing the Pacific’ in 2010.

After more than a decade of ocean-rowing adventures encompassing five voyages, Mick is now, more than ever, determined to inspire the next generation to achieve their goals, whatever they may be, using his story as the perfect backdrop and example of focus, determination, overcoming adversity and achieving.

It’s a story which combines passion, drama, heartache, humour and jaw-dropping wonder, but fundamentally it’s about achieving your goals in the face of almost insurmountable odds. Inspired as a teenager by a mountaineering teacher, Mick aims through his story to impact positively on the lives of the next generation in the same way, showing how to recognise, act on, and most importantly achieve your ambitions.

"Mick is warm, personable, humble, humorous, and as passionate about his adventures as one must be to row across the most vast of oceans. These qualities come across engagingly when he speaks, and they come across in his one-on-one interactions after the formal presentation. His style works for all ages. I heartily recommend him."

"Mick spoke fantastically well, clear and informative. Mick has the ability to present himself modestly and yet dramatically. His experiences and achievements were truly awe inspiring and many students left the presentation commenting that this was the best assembly they had ever had. They loved it."

"Micks visit was outstanding and inspirational, and above all he is an excellent communicator. I believe he would be a tremendous asset to any school and I would highly recommend him in the strongest possible terms."

"We were delighted to have Mick Dawson as our guest speaker.Our Prize Giving is a very important event and Mick presented the prizes and awards with real pleasure and interest in the students.His address was excellent; a thrilling account of some amazing adventures delivered with humour.The whole audience was captivated and enjoyed the accompanying slides too.Mick was also able to illustrate for our students the importance of perseverance and team work in achieving their goals.It was a really good choice for the event and we’ve had a lot of positive feedback from both parents and students."