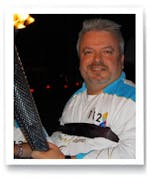 After being diagnosed with muscular dystrophy at age 18, Michael made history by becoming the first disabled person to lead expeditions to the North and South Poles.


The journey gave rise to a new life plan, inspiring Michael to embark on a career as an internationally recognised motivational business speaker. He has built an enviable list of clients, providing carefully tailored speeches for organisations including Virgin, PwC, Shell and the NHS.

Michael also used his Arctic adventures as a launch pad for The Muscle Help Foundation (MHF), a unique national family charity that delivers highly-personalised experiences, known as Muscle Dreams, for children and young people with MD. Michael is affectionately known as the Chief Muscle Warrior; he is a Founder and the CEO.

Michael’s work was recognised in the Queen’s Speech 2004, when Her Majesty praised his “contribution to national life”.

In 2005, Michael received the prestigious Business Traveller of the Year Award presented to him by Kate Adie in Dubai.

He was also a Paralympic Torchbearer in 2012 and four years later, he was named one of the most influential disabled people in Britain, featuring in the Power 100 2016.

Prior to Michael’s expeditions to the North and South Poles, he was an influential figure in hospitality. He remains diligently engaged with the industry having served as a Disability Ambassador for Hilton Hotels, while he also volunteers as a judge on the prestigious Cateys Awards.

“Thank you very much for your visit last week. I know the children at Bishop Wood enjoyed it very much and found your talk both informative and inspirational. In particular, I think the children are now much more appreciative of the constraints that Jack (who has muscular dystrophy) is working under as he works with us to encourage the pupils to take part in sport. The quality and thoughtfulness of the questions at the end of your presentation showed how much your words had made the children think.”

“In the summer term of last year (2013), Michael outlined the work of his inspirational muscular dystrophy charity (The Muscle Help Foundation) at an assembly to Sixth Form students. On the back of this, his charity was selected to be our nominated charity for this year (2013-2014). Inspired by two further recent talks to Yr12 & Yr13 pupils by Michael this week (15 Oct 2013), our students are now enthusiastically planning a number of fundraising strategies around the #powerof657 which, over the course of the year, will raise vital funds to help young people across the country who suffer from muscular dystrophy.”

"Michael came to speak to our sixth form (Year 12) about Muscular Dystrophy as part of their enrichment curriculum. Quite simply it was the most powerful presentation that any of them had ever seen. It also moved a number of the teachers almost to tears. Michael’s approach is hard hitting, but at the same time clear and informative, appealing to both the head and the heart.”