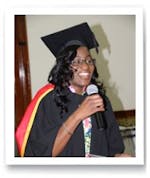 Empower, encourage and inspire our youths

Marian Adejokun is 26 years old and has just finished her MA in Early Years education at UCL Institute of Education. She also has a BA Hons in Early Childhood Studies. It has always been Marian's passion to speak at schools primary, secondary and higher education as she likes to use that platform to empower young children, youths and adults about her story.

Back in 2011, Marian suffered from a one in a million rare deadly allergy reaction to eye drops which caused her whole skin to peel off from head to toe and she ended up in a coma for a month. The name of this deadly illness is known as Stevens Johnson Syndrome. Despite all the odds, Marian pulled through making it to university to complete her degree.

Marian has been interviewed on BBC NEWS and ITV NEWS just to name a few, and has also spoken amongst the Martin Luther King Jr family during the Atlanta Global Humanitarian Summit back in March 2016. She is also a published author of two books.

When Marian was seven years old, a family friend abused her. At the time, his daughter was her friend, so she used to spend the night at their house. Being sexually abused as a young child took a big toll on her life. She felt hopeless, worthless and began seeing herself not how others saw her outwardly. Being sexually abused caused Marian to have low self-esteem which had to be built up over the years as she got older. She didn’t tell anyone about being sexually abused at a young age, she didn’t have the courage to do so and more so she felt ashamed, blaming herself for all that had happened. But in the end of it all, she stands today as a stronger woman, and nothing faces her in life that she is unable to withstand with God’s help.


Marian's desire and passion is to empower, encourage and inspire with her story, teaching students to always believe in themselves and never give up no matter what challenges they may face ahead; they will be able to come through it all.

"What a blessing it is to me to be in touch with you after all these years! Teaching young children like I did involves simply planting seeds, and we rarely get to see the eventual “harvest”. I am so delighted to see that after your tough journey you have become an extraordinary young woman."

"So honoured to have heard your story in person. You are extremely inspiring and I know God will continue to use you. Marian, thank you my darling for the sweet message it put a big smile on my face! Bless you hun you’ve helped me believe anything is possible no matter how big or small the obstacle is at time where I needed to hear it. So thank you! I’m inspired by your courage."