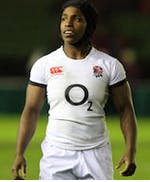 The face of international women’s rugby and arguably one of the most well-known names in women’s team sports on the planet!

Before announcing her international retirement in 2014, she represented her country an impressive 74 times, scored 28 tries, and helped England win a record breaking seven consecutive Six Nations crowns. She was also a crucial member of the team that won the 2014 Rugby World Cup for the first time in 20 years and was part of the team that was crowned the BBC’s Sports Personality Team of the Year.

Through her England rugby career she has become a household rugby name but also a media professional, commentating on live rugby matches for SKY Sports and the BBC, as well as featuring on a number of national media platforms, including outlets as diverse as the Sunday Times, Stella Magazine, the Sun and BBC’s Children in Need (Gareth Malone’s All Star Choir).

Most recently, she was part of ITV’s Rugby World Cup broadcast line-up. Her inclusion made her the first ever former female player to commentate on men’s international rugby.

Maggie is also an excellent speaker, and is well qualified to share her experiences. Certainly when she shares those experiences, you don’t need to be a rugby fan to be interested or inspired by how she has become a prominent figure in the challenging world of a male dominated sport.

From South East London, Maggie has taken her education as seriously as her rugby obtaining a MSc in Sports & Exercise at Roehampton University, a BSc in the same subjects at De Montfort University and a BTEC National Diploma in Leisure Studies at Hertford Regional College. Additionally, she has been awarded a Honorary Doctor of Arts from the University of Bedfordshire.

"Just a note to thank you for arranging the talk by Maggie Alphonsi yesterday evening at Holmewood House. She was superb and the audience, children and adults alike, loved her lively, self-effacing and engaging style."

"Maggie kindly agreed to speak at the WACL (Women's advertising club of London) 'Gather' event, an annual conference run by our club to inspire and inform young women in the marketing and media community. Maggie gave an exceptionally compelling talk on her life and career, focusing on what drove and motivated her throughout. Not only is she a hugely successful elite sportswoman she also has the rare gift of being able to communicate what it takes to achieve those heights in a thoroughly engaging and accessible way. The feedback from the attendees was exceptional for the event and Maggie's talk resonated with all."

“Maggie is an incredibly inspirational speaker. Her presentation was topical and acknowledged the important role that teachers, PE and sport plays in lives. She presented with high energy, emotion, empathy and humour and ignited the audience. She was awesome!”

“Having heard lots about what a great addition to an event Maggie would be, she did not disappoint - from the moment she arrived, her warm smile and easy manner made her a fantastic guest - she was happy to be interviewed, delivering passionate viewpoints about her personal story in rugby then chatting effortlessly to staff - and then taking part in a very honest way in our panel discussion - finally, joining us for drinks and more chatting after, she was just brilliant and inspiring - as well as incredibly honest which is so refreshing. We really enjoyed having her and everyone commented that she was a fantastic addition to the event.”