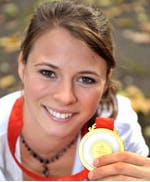 After being introduced to swimming at 3 years old following advice that it would help with her cerebral palsy, Liz Johnson has represented Great Britain and medalled at each of the last three Paralympic Games. She has collected a medal of each colour, been crowned Paralympic and World Champion and was fittingly bestowed with the honour of reading the athlete’s oath at the Opening Ceremony of the 2012 London Olympics.

Destined for the top from a tender age, Liz announced herself in style by winning a Silver Medal at the 2004 Paralympic Games in Athens, when she was just a teenager. Two years later, Liz swan into the history books by claiming two Gold Medals at the IPC World Championships, making her a double world champion. Adding to her achievements, at the 2008 Paralympic Games in Beijing, Liz fulfilled a lifetime ambition, by winning the Paralympic Gold Medal in the 100m Breast-stroke. Liz dedicated her win to her mother, who sadly passed away during the Paralympic Games, just days before her race. Such tragedy is inconsolable, but Liz’s determination to succeed was there for all to see, and she ensured her dream became a reality.

The road to London 2012 was a difficult one for Liz. Although collecting further international titles, including a world record in 2009, Liz had to overcome a difficult situation; just a few months before the Games, she was forced to change coach and relocate from Bath to Manchester. Rising to the occasion once again, she swam a Paralympic Record, winning a third successive Paralympic Medal.

In addition to her swimming ambitions, Liz is an accomplished motivational and graduated with a degree in Business Management and Finance.