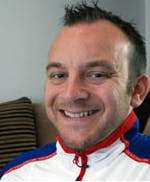 Lee is currently the Head Coach and player for Newcastle Eagles Wheelchair Basketball Team. He acts in a voluntary capacity as Child Welfare Officer for Cleveland Juniors FC in Middlesbrough. He is also an athlete mentor, visiting schools and helping to motivate and inspire students to achieve their goals.

Lee was born with scoliosis, curvature of the spine, and when he was 15 years old it was decided he would need an operation to prevent this getting any worse. Unfortunately during the operation Lee's spine swelled and cut off the blood supply to his legs leaving him paralyzed for life.

Since then Lee has had an unbelievable journey! When he was 18, Lee coached a highly successful junior football team called TCA Juniors who were cup winners 3 times and twice league runners up in the 5 years they were together.

Lee started playing Wheelchair Basketball in 1996 and since then he has gone on to represent Great Britain at the highest level. Lee was selected as part of the squad that went to the Sydney 2000 Paralympic Games, were the team unfortunately finished 4th. After not being selected for the Athens 2004 Games Lee decided to try his hand in Wheelchair Fencing. Lee was quickly selected to represent Great Britain at the European Championships in Madrid where Lee and the team won bronze in Team Saber.

In 2008 Lee was the only British Wheelchair fencer to qualify for the Beijing Paralympic games. He finished 10th in Individual Saber, but the achievement was qualifying for such a great sporting event.

After Beijing Lee returned to the basketball squad where he was selected in the 2009 Paralympic World Cup Squad and they won bronze medal, and then also in the European Squad where the championships were held in Turkey and the team won a bronze medal.

Lee is now retired from playing International Basketball but remains involved with the squad as one of the coaching staff, he also works as an Athlete Mentor Inspiring Young People. Lee is a role model to many people including the kids and adults he works with in his wheelchair basketball coaching and the young people he has visited in schools. Lee's biggest fans are his wife, Linda, and his 4 children: Liam, Jamie, Millie and Matilda.

Lee was exactly what we were after. His story immediately held the children's attention immediately and made them (and the staff) sit up and take notice. There has been a marked improvement in children's attitude towards sport reflecting his never give in approach. From reception to Y6 all children enjoyed the experience. I would highly recommend him.

"Thank you for your email and for arranging for Lee to speak to the staff – he was very inspirational and it’s was great to hear his story of motivation & endeavour to gain some great achievements."

"Lee did a superb whole school assembly and you could have heard a pin drop! Both staff and pupils were raving about how exceptional he was as a motivational speaker."

"Lee recently visited our school at Coulby Newham. A fun-filled, fantastic day was had by all. Both the children and staff thoroughly enjoyed participating in the wheelchair basketball (some staff had to be forcibly removed!)and the presentation was enlightening and inspiring. I cannot recommend Lee highly enough! Huge thanks and please come back soon."

"Thank you Lee for visiting us at Gibside School. Your talk was inspirational to staff and children. We loved asking you questions and seeing your medals. We have written about you on our GET SET blog and are delighted with how you have brought the Paralympic values to life for us."

"Lee is excellent speaker and knows how to engage his audience and is defiantly a top class coach. He comes highly recommended by all staff and pupils at Abbey Hill School in Stockton."

"Overall we were very happy with Lee Fawcett and the feedback on his presentation was very positive and the students were fully engaged in his story."