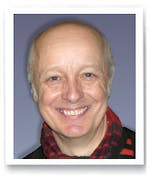 Kjartan Poskitt has written over 80 books, and they have been translated into about 30 languages.

Although he’s best known for the 18 Murderous Maths books, he’s also done books on space, codes, magic, puzzles, Isaac Newton, and many hilarious children's novels including the award-winning Agatha Parrot series. He has also written five historical musicals, one of which “Henry The Tudor Dude” has had over 250 productions.

Kjartan has toured UK schools and festivals constantly since 1999. In that time over 200,000 people have seen his author talks which mainly involve using maths to make children laugh.

For his maths talks he uses powerpoint as well as a flip chart. He introduces the people who really did put the murder into maths (the Ancient Greeks), he demonstrates his flexagons, he invites kids on stage to learn a few tricks and "games you can't lose". He also shows some amazing facts such as the pile of pennies that goes past the sun, or how to make a dragon from a cinema ticket.

In a day visit he can do one or more big maths talks to yrs 3-8 (no limit to audience size), plus a short talk showing visual tricks to Years R,1, and 2. He can also do G&T workshop groups leaning extra tricks or making things. As well as maths he can talk on space or his novels and is happy to take author questions.

Kjartan is recommended for STEM and similar events.

Before being an author, Kjartan was a T.V presenter for BBC Schools, and lots of other miscellaneous T.V dating right back to Swap Shop! He was also a pub piano player for ten years, he devised games and puzzles for books and T.V, he did the theme music for several BBC shows, he’s had his own radio show and he has been Widow Twankey in Aladdin.

Kjartan was born and lives in York. He has a nice wife, four daughters, a collection of lethal old music synthesisers and two pinball tables.

"Today's talk ranks as the most entertaining event we have ever had and Kjartan's approach to the kids is admirable (to be able to bring out their enthusiasm to this extent is most astonishing). I cannot thank you enough and no doubt, I/we will be using the ideas in our Maths lessons."

“'How to follow that?'…. As they say. The place is abuzz with a wonderfully positive vibe – but the expectation of the children is now driving my fellow Maths teaching colleagues to distraction. Many, many thanks for your visit and presentation which had us thoroughly entertained and being taught in tandem. I have no doubt that our paths will cross again and another invite sometime in the future, so thanks once again, it was a pleasure to meet with you and share your passion."

"I just wanted to say how much we all - children and adults - enjoyed your visit to our school on Monday. I have heard so many enthusiastic comments from children in the library and around school and also from teachers. It was perfect for our children and all your books were borrowed from the library in the first hour on the Tuesday morning! One of the children who had bought a book told me she had already tried out some of the ideas, and I heard her trying out one of them on a dinner lady, who was busy working out "now times it by 5" on a piece of paper!!"