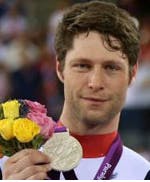 From tours in Afghanistan to elite paracyclist

After leaving secondary school Jon-Allan joined the RAF in 2002 and served in Afghanistan in 2005 and Iraq in 2007 as a SAC(T) weapons technician. On 4th August 2007 he was injured in a rocket attack on Basra Air Station, Iraq. He was operated on by doctors in a battlefield hospital who consequently carried out an above the elbow amputation of his left arm.

It was while recovering at the Defence Medical Rehabilitation Centre in October 2007 that Jon-Allan first made contact with British Cycling coaches. He attended Paralympics GB talent ID day but did not follow this up as a "return to work" programme was put into action with the RAF, which he wanted to fully commit to.

Later in May 2008 he became involved with the Help for Heroes Big Battlefield Bike Ride, a 350 mile cycling challenge around the battlefields of Northern France to help raise funds to benefit other injured servicemen and women.

Inspired by this experience and watching athletes such as Sir Chris Hoy in the Bejing Olympic Games 2008, Jon-Allan attended a selection weekend in Newport and was accepted on to the British Paracycling Programme in January 2009.

Despite cycling for only a few years, Jon-Allan has achieved a great deal, not only in cycling, but in overcoming and embracing new challenges in life since his tour in Iraq. Jon-Allan continues to seek new challenges and this year he joins the joins the line-up of contestants for series 2 of The Jump (Channel 4).