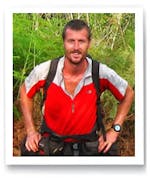 John Sullivan's 'Survival Story Presentation' motivates and inspires students, offering an insight into new cultures, exotic countries and exciting adventure. John Sullivan joined the Royal Marines at the age of 16, travelling across the world in pursuit of adventure. After leaving the forces he started a company specializing in extreme survival training, working in some of the most inaccessible corners of the globe.

John has been an expedition leader for several conservation projects leading gap year students in the jungles of Belize and Borneo and has set up numerous prime time programmes for the BBC and the National Geographic Channel. These have seen him living successfully with different cultures including the famous Biami Cannibal tribe in the Papua New Guinea jungle and the Nomadic peoples of the Sahara Desert. Lasting a minimum of one hour, these interactive and engaging presentations consist of a unique roller coaster of images, sounds and amazing tales that encourage students to follow their own dreams and achieve their potential.

John is a keen supporter of the Duke of Edinburgh scheme. He enjoys a close affinity with the sense of achievement that young people feel following their success.

John feels immensely proud to be asked every year to attend award presentations at St James Palace. Along with His Royal Highness Prince Philip, The Duke of Edinburgh and Prince Edward, The Earl of Wessex, he presents the Gold Awards to the successful young people.

John also feels honoured to be a regular guest speaker at this event. He gives a rousing speech, congratulating the young people on their amazing achievements. They, in turn, feel a similar sense of privilege; not only are they rewarded for their efforts by meeting members of the Royal Family, but they also get to know John Sullivan, a man whose own achievements so often mirror their own.

"The session with John was a great success. The students thoroughly enjoyed his presentation."

"John was excellent. His talk was pitched at exactly the right level. He arrived in plenty of time, was efficient and well prepared for his talk."

"The presentation was truly inspiring; our students really enjoyed listening to John's experiences in the Royal Marines and his role working for TV companies in the jungle that they realised they could be just like him. By working hard, broadening their horizons, learning new skills and believing in themselves they too could achieve anything they put their heart into. An inspiring day that left an enduring impression - fantastic."

"Thank you so very much for coming to talk to our sixth formers yesterday evening. Having read the testimonials on the School Speakers website and having done a wee bit of research about you online I was pretty sure that you were going to be an excellent speaker and you certainly lived up to our expectations! The students were absolutely buzzing by the time that you left, they absolutely loved your talk. The mix of slides and video clips really enhanced the talk and brought your experiences to life and what really struck me was looking around at the students' faces and seeing the admiration in their eyes and that look of 'I could actually do something like that'. I was particularly impressed at how you aimed the talk at exactly the right level for them too, because when you meet someone like you who is so accomplished and has done so much it is very easy to feel a bit inadequate and yet you come across as being just an ordinary bloke, although clearly you are not! The centre is buzzing this morning with anecdotes and tales of your adventures."

"I just wanted to say a big thank you to John Sullivan who came to our school to deliver a speech at our awards evening for Year 9. He did a fantastic job, his speech was an excellent balance of motivation humour and inspiration. He kept us all gripped for 20mins. Many of out 300 guests have spoken to or contacted me since to say that he was the best speaker we have had in many years."

"This was the second time that John has spoken at the school and he was if anything even better than the first time. He has an interesting story to tell and he not only inspires by example but gives good practical advice. We must all 'feed the rat', even our 'secret rats' to be fulfilled and happy. I would wholly recommend him as a speaker for all ages from teens to adults."

"A fast paced and truly motivational talk, offering pupils inspiration to see the world and follow their dreams."

"John Sullivan was excellent on Friday. The girls’ feedback is extremely positive and we hope that we may use him again next year!"