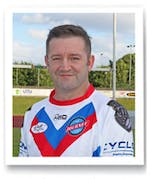 It's a 'State of Mind' - the body achieves what the mind believes. You just have to teach it. Passionate about mental health and the importance of mental fitness.

Jimmy Gittins is an ex-rugby league player, who in 2002, suffered a horrific injury which broke his neck in 2 places. This injury put an end to his playing career and changed his life forever. He has spent the years since his injury pushing his body to new limits. Jimmy walked out of hospital after nine hard, painful months and has since taken on one challenge after another.

Jimmy does all this with a smile on his face. His positive attitude to life and to his own limitations can't help but rub off on those he meets. Before his accident, Jimmy also ran his own very successful construction company with his family. After leaving hospital, knowing he couldn't return to his previous careers, he saw an opportunity, and with his friend and physiotherapist formed a specialist rehabilitation unit. This has gone from strength to strength - winning national and regional awards.

Jimmy has recognised the support he received when he needed it the most, and now works to help others as an ambassador to the rugby league benevolent fund and the Steve Prescott foundation. Jimmy has also recently been appointed a trustee to the nationally recognised 'State of Mind' programme, travelling all over the country giving presentations on the importance of mental fitness.

Amongst many incredible feats for charity, Jimmy became only the second person in history to complete Lands End to John O'Groats on a hand cycle - in a record time of just 11 days. His achievements highlight a desire to never give up, and his ability to set and accomplish his goals, despite negativity, demonstrates his true character. These are lessons that anyone can use to achieve their own goals and get to where they want to be in life.

"Jimmy was fantastic, just what we were looking for to motivate our students and a very likeable chap, it was a huge success."

"It was great to have Jimmy in to speak to the Barnsley College Sport & Public Services Students. He captivated them. He is a truly motivational speaker and a role model that everyone should hear at least once."

"Jimmy's talk inspired and moved students and staff in equal measure. A powerful and effective speaker, Jimmy captivates the audience with authenticity and humour. Our students were able to recognise the parallels with their own challenges, and spent the afternoon discussing Jimmy's input. We feel privileged to have heard Jimmy speak and look forward to inviting him back again soon. As one student suggested, 'he was brilliant - funny and motivational; thank you for sharing your experiences with us Jimmy."

"Thank you both for an inspirational and motivational talk. The students were incredibly uplifted and they provided us with some great feedback."

"Jimmy went down a storm, I’ve had nothing but glowing praise about his presentation. People are still talking about it now so he has certainly made a lasting impression on our guests! "