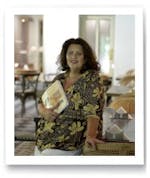 Author Jenny Mallin will guide you through five generations of her family who all lived out in India during the British Raj. She has written an award winning book which was based on her great x 4 grandmother's ancient cookbook, written in 1844 in Madras. Jenny brings to life generations of ancestors before her using the catalyst of this old recipe book - so we learn about their lives on the Railways, Telegraph and in the Military as well as their lifestyles.

Jenny has given numerous book talks since publishing her book both in India and here in the UK - with the Rotary Clubs, Women's Institutes, Family History Society, U3A and Probus.

She was recently interviewed by Jenni Murray on BBC's Woman's Hour, and has had numerous radio interviews at BBC Radio Berkshire with Bill Buckley and Anne Diamond where she took her Anglo Indian food in for them to try. Jenny has also affiliated herself with top cookery schools in the country. For the past two years she has been an Anglo Indian Cookery School tutor at the Women's Institute headquarters at Denman College, Oxford. Jenny has been featured in "The Lady" magazine, "Who do you think you are?" magazine, "Waitrose Magazine" and also "Sainsbury's Magazine".

Jenny's book talk will cover five generations of her family who lived out in India during the British Raj. It will be a visual and engaging presentation with lots of sepia family photographs, family stories linked to both the history pages through the old recipe book of her grandmothers dating back to 1844. It is a unique peek inside the lives of an Anglo Indian family with Victorian values and loyalty to King and Country. Jenny will uncover some of the history behind the Anglo Indian recipe names such as Vindaloo, Country Captain and Korma and lead you on a culinary journey too!

Jenny’s earliest memories are of her mother in the kitchen, tapping a wooden spoon against the side of a metal dekshi and then tasting her curry sauce, checking the seasoning. From that moment, Jenny was hooked and her mother continued to nurture her love of cooking throughout her childhood. The kitchen, a wonderfully warm and intoxicating environment, became an indoor playground filled with new experiences, challenges and the end result – something delicious on a plate.

With her passion for cooking, India, research and writing, producing this book was a labour of love for Jenny, all the result of a hand-me-down, handwritten cookery book passed down through generations of her family.

Now a writer, Jenny has worked in the past as a PA, a Travel Buyer and in a number of television production roles for the BBC. Now living in Kingsclere with her husband Stewart (and a selection of cats), any spare time is devoted to painting, jewellery making and enjoying the outdoors.

"As you no doubt noticed your presentation was well received by our members who thoroughly enjoyed your illustrated talk with its illuminating insights and references to traditional family recipes. The details of the life style and traditions of the Anglo Indian Community seen through the lens of several generations of your family brought alive an aspect of the Indian Raj that is little known. It is so easy for the detail of history to get lost yet your family’s preservation of photographs, anecdotes and recipes has enabled you to shine a light on this era and on their lives in particular. It was a great pleasure to hear about it from you."

"Jenny gave us the most amazing insight to her family and heritage. She will transport you from Yorkshire to India, with a visual feast of her ancestors and their lives.From Yorkshire pudding to curry, a wonderful fusion of cultures and the changes they embraced. Jenny is wonderful story teller and inspirational writer."

"Inkpen Pudding Club members were charmed and enlightened with an evening full of stories and anecdotes from Jenny’s family history that also form a large part of her award winning book ‘A Grandmother’s Legacy’. These stories interweave her grandmothers’ recipes bringing them to life and preserving their history in the most enchanting way. Guests were treated to Onion Bhajis and gorgeous Tiffin made by Jenny’s fair and very experienced hand. It was a privilege to feel at the end of the evening you had shared in a little bit of her life and success. Highly recommended."