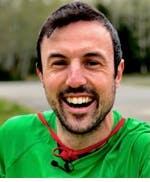 "Anybody can be a superhero!"

Jamie McDonald aka Adventureman, against all odds, has become something of an adventurer – and he wants to show the world that ordinary people can do extraordinary things. Having raised over a million pounds for charity, his message is that ‘anybody can be a superhero’.

Having overcome debilitating and life-threatening childhood illnesses to conquer monumental physical and mental challenges in a bid to give back to those that helped him, the real-life superhero knows what it means to keep going against the odds. His challenges include having cycled 14,000 miles around the world on a rusty old push bike, as well as completing two historic cross-country runs.

In 2014, Jamie ran 200 solo marathons across Canada – a marathon a day, most days, battling temperatures as low as -45C, which he likes to point out contributed to a frost-bitten nose and losing a portion of the end of it! His second running adventure was a 210 solo marathon challenge across America, dodging monsoons, rattlesnakes and a mountain lion as he darted around as many children’s hospitals as he could fit in.

If that wasn’t enough, Jamie is the owner of two of the toughest and most gruelling endurance Guinness World Records on the planet.

He cycled for 12 days non-stop on a static bike in 2012, and recently spent 7 days on a treadmill, surviving on less than 3 hours of sleep a night. He covered the greatest distance ever achieved by a human in that time; a distance of more than 524 miles. That’s 3 marathons a day – a total of 20 marathons – back-to-back.

Arduous physical adventures aren’t the only challenges Jamie has overcome. As a dyslexia sufferer, he often found negotiating the conventional academic system an uphill battle. And yet, none of this prevented him from becoming a bestselling author, and being awarded with an Honorary Fellowship by the University of Gloucester – the highest accolade the University can bestow.

Jamie’s story is one of an ordinary boy finding the willpower to succeed against the odds. He is living proof that we are capable of so much more than we will ever know, and it’s this message he hopes to pass on to the next generation of dreamers and doers.

“Without a doubt the best speaker we’ve ever had for aPrize-giving Day. We can’t wait to have you back again!"

“At our Prize-giving Day, Jamie wowed our audience of 800 people. His messaging of believing that your capable of more was spot on for the whole crowd – from ages 8 to 90 years old. I think the standing ovation at the end said it all.”

“I found Jamie’s story very inspiring. I loved it, I loved why he does it, and I love him. I believe he is of a rare kind of person. He does things for other people rather than for himself. He has shown me the bigger picture, and I’ve learnt that rather than spending my life working for myself, I should spend it helping others whatever they need. I’ve realised that if you judge, you cannot be free. But if you simply love, and help other people, or environments, there can be so much more sense of accomplishment than working a day job for the government or macdonalds. I appreciate him so much.”