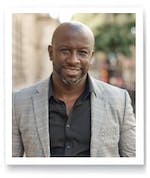 Enabling young people to experience their 'eureka moments' about school, wanting them to learn and become passionate about education.

Herman Stewart is the founder and CEO of Every Child Needs a Mentor. He is a pioneering, award-winning mentor, an author, speaker and is passionate about young people becoming all that they can be. His mentoring work has been rated as ‘High Quality’ by Ofsted and went unto – receive an award for Closing the Achievement Gap.

For over 15 years Herman has been motivating children in both state and private education inspiring children to achieve their best and to achieve their highest results possible. His background of playing football with Paul Scholes to rapping alongside some of the most prominent acts in the world gives him an edge and helps him to connect with young people.

Herman's presentations are relevant, engaging and laced with plenty of humour. His unique style helping students to see the importance of having healthy relationships with staff, behaving appropriately and making their best possible efforts make Herman's style unique.

If you want your young people to not only be motivated but inspired and fired up to up their game in their GCSE's or SAT's, Herman is your man, so book him!

"Herman has delivered motivational assemblies to Key Stage 4 pupils at this school. His work has had a very positive impact on the pupils. Herman's innovative approach has proven successful particularly with our less motivated and disengaged pupils. Focus and motivation in lessons has improved and is evident in school data."

"Herman was amazing, our pupils thought he was amazing. Thank you so much for arranging this excellent speaker and opportunity for our pupils. - We will 100% use him again next year."