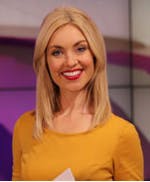 Award winning investigative journalist & anchor on BBC Newsround - currently reports for BBC Sport, BBC Breakfast and The One Show, after many years working as an undercover reporter for Panorama!

Hayley is an award winning investigative journalist and anchor on BBC children's news programme, Newsround. Hayley currently reports for BBC Sport, BBC Breakfast and The One Show, after many years working as an undercover reporter for Panorama.

Hayley’s recent documentary on The Winter Olympics was played on Prime time BBC2 and iPlayer. For this Hayley battled -15 degree snow storms, reporting on snow-capped mountains and presenting for BBC live as the gold medals came sliding in.

Hayley was the first reporter to reveal the results of the UK general election in 2015 and has enjoyed presenting at live events such as Wimbledon and the Olympics.

As an investigative journalist Hayley worked for BBC current affairs programme 'Panorama', spending over a year and a half undercover. She spent most of 2007 working in three maternity hospitals across the UK where she uncovered over worked staff, lack of patient care and in the worst cases, pregnant women being left unattended and without beds or medication. In 2008 Hayley continued to work undercover and even changed her name whilst working as a carer for elderly people, where she exposed a severe failure in private equity home care. Hayley's undercover work resulted in major improvements to British health care and earned her a BAFTA, an International Prix Europa award and two Royal Television Society awards.

Hayley has also reported for The One Show and Songs of Praise, covering vast range of topics from children in poverty, beauty pageant to illegal cosmetic surgeries.

When you watch her speaking fluently on screen, you would never guess that she suffered from a bad stammer from the age of four. She was told she would grow out of it eventually, but at that age each day was a long time and she used to get teased. It wasn't until Hayley was 11 that she was offered help in the form of speech therapy, which taught her techniques to help deal with the problem and she now wants to raise awareness that one in ten children in the UK have problems with communication. Her experience has led her to become an ambassador for the children's speech, language and communication charity, I Can (ican.org.uk), which offers expert resources so children can be diagnosed and given help at an early stage.

To top this all off, Hayley has jumped out of a plane at 21 thousand feet, broke a world record, challenged the Prime Minister on child education and slept on the streets of London for 32 hours.

"Hayley was fabulous thank you for recommending her."

"She gave an amazing speech in front of 200 pupils, parents and visitors. She was well prepared and spoke about her own educational experiences and how they have helped her. She put a positive message into context for all the children who were delighted to see her. She stayed for the whole evening, giving out awards and speaking to the children and parents at the end of the evening. Mrs Hassell made a huge impact on our children and community and continues to be spoken about with fondness by everyone who came into contact with her. We look forward to continuing our relationship with Mrs Hassell in the future."

"Hayley was an engaging and friendly MC who helped us facilitate a successful Inclusive Heritage Conference at Tate Modern last October."

"Hayley hosted a CBBC event for us at the Hay Festival last year. She skilfully managed a tent full of eager children (& their parents); encouraging their participation and managing their excitement. She compered the session with ease - getting the balance of asking insightful questions of our talent herself and letting the kids have their say! Hayley was warm and approachable with the children and I know everyone really enjoyed having her lead the session."

"Hayley hosted the I CAN Million Lost Voices Gala and gave a moving speech about her own experiences.We really can not thank you enough for your contribution. Hayley was engaging, emotive and witty. Not to mention extremely glamorous."

– Emma Selim, Senior Press and PR Officer at I CAN charity​