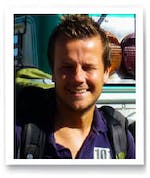 101 things to do when you survive

Greig Trout is the founder of ‘101 Things To Do When You Survive’, a website and initiative designed to inspire people to live fulfilling lives and to pursue their dreams whilst helping others along the way.

In 2013, after recovering from cancer for the second time with just one kidney, part of his large bowel missing and deep vein thrombosis as well as coping with the effects of PTSD, he created a website, ‘101 Things To Do When You Survive’ and set off on a two year adventure around the world.

The original aim of the website was to help people experiencing ill-health to feel excited about the future, instead of fearing it, however it became about much more and appealed to a far wider audience than expected. Throughout Greig’s travels, he wrote a highly acclaimed blog and made videos of his journey.

Whilst on his journeys he achieved his dreams and goals by ticking them off of his anti-bucket list. He also volunteered, fundraised for various charities, raised awareness of mental health and the psychological effects of cancer and, above all else, inspired people to believe that anything is possible.

Greig is now back in the UK and about to embark on a national school tour spreading his message of hope whilst also raising awareness of mental health issues. He has given presentations to schools and organisations all over the world, such as Cancer Council Australia, Channel 4 and Wellington College in New Zealand. He is also a regular speaker for Cancer Research UK.

His talks are considered motivational and inspirational. Drawing on his life experiences from his journey through cancer and of course ‘101 Things To Do When You Survive’, he covers topics such as reliance, body dysmorphia, helping others, goal setting and achievement and mental health.

His presentations are adapted to each specific audience which means they are suitable for young people of various ages and backgrounds and they normally last from 20 to 60 minutes, depending on the time available. The content itself is generally quite interactive and encourages audience participation, getting the pupils to think about life goals and routes by which they can achieve them as well as ways to simply help and be kinder to others in life.

"We were incredibly impressed – really superb session, thank you. We will happily invite him back to our Sixth Form in a couple of years time."

“Greig is truly one brave man, and is determined to shine a light and help inspire those who have faced real battles - I admire his courage and resolve so much. No wonder he is a Scout”

“Greig came to speak to our Year 11 and sixth form students just as they were beginning mock examinations and revision, giving them a much needed boost. He told his fascinating and inspirational narrative with tons of humour and put the audience through many emotions while tailoring the talk to our own situation. Members of staff said that Greig was very inspirational and students said it was the best assembly ever. One form tutor told me "My year 11 were all so impressed by what they heard yesterday, the visit has made a big impact on them!" I will be reminding our students about the buzz you get from positive visu alisation and knowing that you are going to achieve your goals".

“Greig came to visit us in November and spoke to our Y1 and Y2 children about his amazing life story. He explained to them how he had overcome extreme low points in his life following serious illness by choosing to have a positive, ‘can do’ attitude and setting himself ambitious and challenging goals. The children loved seeing the pictures of the incredible places he had visited on his travels and the people he had met along the way who had made his experience so memorable. His talk was inspirational for the adults as well as the children who listened to him. Many of the children have already made a list of places they want to visit and adventures they want to have when they are a little older. Many of the staff have decided not to wait until retirement to have that next big adventure!!”

“When Greig came to speak to us at Channel 4, I was expecting to leave in tears. I couldn’t have been more wrong, while harrowing, Greig’s story is uplifting, encouraging and exhilarating! You hear him speak and think “I can do this, You can do this…WE can do this”. He’s an inextinguishable light.”

“Then impact Greig had as Key Note speaker at our Relay for Life Summit was massive and people did not stop raving about him afterwards. The things he said, the way he linked his story to Relay for Life, his presence, his manner - all were just so wonder an we were so honoured to have him in the room, Thank you so much Greig”

“Greig is one of the most inspirational men I have ever met, so to have speak at my children’s school was an incredible experience. He kept a room of 100 young children completely captivated which is not an easy task! Greig seems to inspire people effortlessly- every person he meets seems to walk away feeling excited about life and motivated to do good in the world. He is a rare talent”