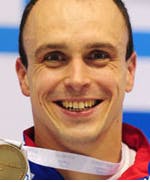 In October 2000 Graham Edmunds was the unfortunate innocent victim of a motorcycle accident whilst travelling to work. His injuries were so severe that doctors considered amputating both of his legs and believed that he would never walk again. He spent three months with his legs in casts before beginning swimming again as part of his physiotherapy routine. Because he had limited movement in his ankle joints he qualified as a disabled swimmer in the S10 category. When Graham met the British Paralympic coach Billy Pye, he decided to begin training for the 2004 Summer Paralympics.

Graham made his first appearance at the Paralympics in 2004. He competed in two individual S10 classification freestyle events as well as the 4×100m freestyle 34 pts relay team, in which he won a Gold Medal.

In 2008 Graham won a silver medal and set a new British record in the S10 50m freestyle at the British Swimming Championships on his way to qualifying for his second Paralympic appearance for Great Britain at the 2008 Summer Paralympics, held in Beijing, China. Graham raced in the same three events as in 2004 as well as the 4×100m medley 34 pts relay team. The freestyle relay quartet successfully defended the title they had won in Athens, setting a new world record of 3 minutes 51.43 seconds, on route to winning gold.

Graham also competed in the International Paralympic Committee European Swimming Championships from 2009-2011, adding two bronze medals in the men's S10 50m freestyle event and a gold and bronze medal for his part in the 34pt 4x100m freestyle event to his collection. He is also a Patron of the Electric Eels Swimming Club, the first competitive club for athletes with Down’s Syndrome.

Graham is the British Disability Swimming’s Athlete Rep, which means he has two important roles above and beyond that of voicing the opinions of the Athletes to the National Performance Director and management team. He sits on the British Disability Swimming Technical Committee, which discusses all of the rules and regulations that govern Disability Swimming within Britain. He also sits on the Swimming Competitors Association, which is a group of athletes from all of the aquatic disciplines set up to discuss situations that affect all the athletes across the sport. Graham is an active member of the British Athletes Commission, because of his unique position he voices the opinions that may concern both Aquatic and Disability Athletes.

He is also working with the Specialist Schools and Academy Trust introducing students to the practical application of the Olympic and Paralympics values. Within his story he highlights the values and the affect it has on others. The students then look to put these values into everyday practice once they return to their individual schools.

Graham has demonstrated that in the face of adversity, and with great will power you can achieve. The proof of this is his immense success at the top of the world within his sport, and the fact that he has an Honours degree in Pharmacy from Portsmouth University, and is a registered practicing Pharmacist with the General Pharmaceutical council and is a member of the Royal Pharmaceutical society of Great Britain.

“If inspiration was a raindrop Graham would be a monsoon!”