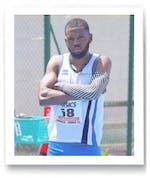 Fulfil your potential, set a goal and keep moving forward!

Frederick, known as Fred, is the perfect example of how “hard work beats talent, when talent doesn’t work as hard”. His motto “keep moving forward” has been a staple in his rise within the athletics ranks and a motto that resonates with the many young people that Frederick has spoken to.

Born in Milan, Italy, Frederick started his sporting life as an athletic footballer who quickly gained popularity within the Lombardy region for his silky skills and lightning fast speed. He would regularly win school level races but never thought that athletics was his calling until he moved to London & was pushed to get into athletics by his PE Teacher, Mr Silly, who was once a Togolese track and field athlete himself.

Frederick quickly found his feet in athletics winning gold at his first ever English Schools Championship, representing London in the 4x100 relay and the 200m sprint. He finished his first competitive season ranked 2nd in Italy and has since represented Italy at various international competitions. Fred kept moving forward and on his third attempt, managed to come home with 5 national medals from the Italian u23 national championships both indoors and outdoors.

Frederick has since graduated from university with a degree in according and french, proving that with the right balance, academic excellence and sporting dreams can coincide. He now spends a lot of time travelling to many schools across the U.K. to inspire children and young people with his entertaining and engaging assemblies.

Very inspiring for the children

Fun, approachable and went out of his way to engage with all the children and put on a great assembly