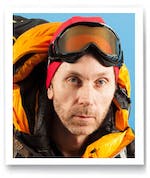 Ellis J Stewart is by his own admission an accidental speaker and author. He is quite a unique character in regards to people attempting to climb the highest mountain in the world. Something he attempted in 2014 and 2015. Through no fault of his own, events transpired to prevent him from stepping foot on Everest’s summit, events that ended in quite tragic circumstances. Ellis is the first to admit he is not your stereotypical mountaineer. Having dreamed about climbing the mountain for twenty years plus he has never let go of that goal. Through the steps he took, and the entrepreneurial spirit displayed he was able to fund almost entirely the £80,000 that the two attempts on the mountain cost.

Ellis is no stranger to adversity and rejection. Ellis first tried to get the funds together to climb the mountain in 2002. Through a lack of interest from potential sponsors he tried again in 2003, 2004, 2007 and 2013 before finally arriving at the foot of the mountain in 2014. Little did he or anyone else realise what was about to happen during this attempt, an attempt that ended early when sixteen Nepal Sherpas were tragically killed early in the climbing season. Ellis returned to Everest one year later determined this time to reach the summit. Once again events conspired to end his attempt when a devastating earthquake hit Nepal and nineteen people on Everest were killed. Ellis narrowly survived being killed by an avalanche on the mountain.

In the summer of 2015 Ellis began to write his story of being caught up in these two tragic seasons on Everest. In a book titled, Everest: It’s not about the Summit, he wrote very candidly about not only his experiences on the mountain but also what drove and propelled him towards Everest in the first place. Not able to entice a publisher to take the project on, Ellis wouldn’t take no for an answer and decided to self-publish the book. After launching a massively successful crowdfunding campaign Ellis was able to pay the editing and printing costs to release his book, which he did to rave reviews in late 2016. Due to popular demand Ellis launched another campaign to bring the book out in a Hardback format in December 2017. Once more he successfully raised the money and was able to release his book in a limited edition run of 250 copies. They sold out instantly. In early April 2018 the book went to the #1 spot in the Mountaineering category on Amazon and continues to receive rave reviews. Ellis J Stewarts astonishing book, Everest: It’s not about the Summit, is available now exclusively through Amazon.

Although being just a regular guy trying to climb the mountain, Ellis accidentally became a public speaker after being invited to share his dream with local community groups. This snowballed and before long Ellis was speaking in front of up to 250 guests at corporate events across the whole of the UK. His inspirational story and appeal are universal. He has motivated and inspired everyone from primary school children, a packed conference full of accountants, to a large group of octogenarians.

In July 2016 Ellis was presented to HRH Prince Phillip Duke of Edinburgh at Holyrood Palace after being invited to present Gold Awards to a group of young people from Cumbria. HRH asked Ellis if he had reached the summit. Ellis replied that he hadn’t due to avalanches and earthquakes. “Far better story anyway” said Prince Phillip as he strode off.

Ellis has raised thousands of pounds for several charities over the last several years, including Nepalese children’s charities, The NSPCC, Teenage Cancer Trust and several children’s hospices and cancer charities.

In October 2021, Ellis’s second book was published in the United Kingdom by a small independent book publisher, FBS Publishing. Misadventure: Lessons Learned from a Life of Ups & Downs is available now direct from FBS and Amazon and is continuing in the same vein as Everest by so far gaining glowing reviews.

"The children enjoyed listening to his stories of mountaineering and resilience."

"We thought that Ellis was very engaging and the children really loved hearing about his experiences. He was very adaptable as we had a bird flying around our hall during part of his speech! It was great for the children to learn about his successes and even more importantly, his failures as it delivered a very important message about persistence and resilience."

"I had the great honour of being a Presenter Marshal at the Duke of Edinburgh’s Award Gold Ceremony at Holyrood Palace in Edinburgh. Ellis Stewart was the presenter. What a fascinating, awe-inspiring, personable man he turned out to be. He handed out awards to the young people and then stayed to chat and answer questions. Nothing was too much bother – many of the young people were keen to look at his DofE Record book and discuss those experiences as well as those on Everest and conversation flowed. I would thoroughly recommend Ellis as an inspirational speaker – he is an inspiration to us all."

"Ellis is an Everest wannabe! His whole adult life has been devoted to conquering the highest peak on Earth, when he’s not running his on-line business or caring for his daughters. He came to Ian Ramsey Church of England Academy in October 2015 with his story – and what a story! He had the pupils in Years 10 and 11 gripped with his tales of his 2 attempts at Everest – both thwarted by events which made global news. Ellis was above base camp earlier in 2015 when the earthquake in Nepal caused an avalanche which literally wiped out base camp killing many, many mountaineers and Sherpas in its trail. He survived to tell the tale and his story of resilience and determination makes for a great experience. You can’t help but be inspired to take on your ‘own Everest".

"Ellis’ talk and accompanying presentation was absolutely fascinating and pupils, parents and staff alike were fully engaged by what he had to say. The presentation was pitched perfectly to the target audience but the message was a universal and inspirational one. The purpose of Ellis’ presentation was to encourage his audience not to give up in the pursuit of their own ambitions and to be determined in their efforts to summit their ‘own Everest’. Parents and staff were clearly inspired by Ellis as were the pupils. Their realisation that someone from the local area with a similar socio-economic background could experience such adventures in pursuit of a dream has encouraged them to think about their own lives and how they might strive to make the impossible a reality."

"Thank you so much for taking time out of your undoubtedly busy schedule to come and deliver an inspirational assembly to our year 7, 8 and 9 students. The presentation you gave was fascinating and pitched just right to keep six hundred plus, 11-14 year olds (and around 60 members of staff!) totally engaged for 40 minutes. Raising the aspirations of our students is a kept focus for us as a school and the story of your amazing personal journey from Dyke House student to successful adventurer and entrepreneur is exactly the message we want to get across to our students. The fat that you never lost sight of your dream, even in the face of true adversity, determined to find ways round each stumbling block (or mountain!) is the sort of creative thinking and tenacious attitude we want to promote to our students (and staff too!)"

"Our Awards evening is about celebrating the achievement, hard work and commitment of young people, on the road to achieving their dream careers. Our guest speaker, Ellis Stewart, is someone who knows about the dedication and commitment needed to achieve a dream to stand on the top of the world and his inspirational story inspired us all."