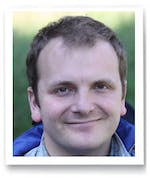 Dr Michael Garton broke his neck in 2006 attempting the first solo ascent of Europe's tallest and most feared rock face – the Troll Wall. Despite being paralysed from the neck down he went on to earn a doctorate in Molecular Biology and now travels globally, working as a scientist for some the world's leading medical institutions.

In addition to academic progress, he has, since his accident, been skydiving, skiing, mountaineering, snowmobiling, solo sailing, and much more.

Michael provides a great example to children of how adversity can be overcome by determination and a positive approach. He further demonstrates why choosing to pursue a career in science can lead to hugely diverse, exciting, and rewarding careers. Emphasising curiosity as the number one ingredient for success in science, he relates the scientific method to everyday experience and inspires children to "find out for themselves".

"Michael has great presentation skills and commands positive attention when he speaks.The evaluation forms I recieve at the end of the sessions always comment on Michael's part in the lectures and rate him as the most interesting part; the word inspirational crops up frequently. I can't recommend Michael enough."

"Michael's talk and interactive Q&A session had a significant impact on the group of students. His energy, enthusiasm, and humour make him a naturally engaging storyteller. Many of the students demonstrated an immediate improvement in progress towards their personal therapy goals as a result of Michael's visit. Therapists and teachers brought the story of how Michael embraced his differences and overcame his limitations into subsequent sessions. At our end of year celebration, our students unanimously rated Michael's visit as the most memorable session of the year."

"Michael is a very personable, inspirational and highly engaging presenter and facilitator.The sessions at The Brunts School were exceptionally well received by the students with whom Michael immediately established a rapport and positive relationship. I have no hesitation in recommending Michael to schools; his future audiences will not be disappointed!"