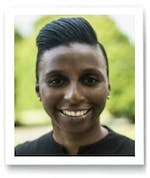 4x Olympian in Athletics and Vice President of UK Athletics

Donna Fraser is a former sprinter, who competed at four consecutive Olympic Games for Great Britain, has developed a wealth of experience within the field of equality and diversity communications since her retirement from competitive athletics in 2009. Donna has become a leader in equality diversity and inclusion with over 10 years of corporate experience within business, sport, leadership, well-being and PMA for both start-ups and established companies.

In 2021 she was awarded an OBE (Order of the British Empire) for services to equality, diversity and inclusion in the workplace and has served as a Trustee, advisor and Board member for multiple organisations such as the London Marathon Charitable Trust, Women’s Sports Trust, British Athletes Commission, International Women’s Group and Her Spirit to name a few.

Donna Fraser is a 4x Olympian and former 400m sprinter for Great Britain, with a successful athletics career which spanned over 20 years and has a host of European, Commonwealth and World medals. Donna, unfortunately, retired in 2009 due to being diagnosed with Breast Cancer. She was recognised with the Freedom of the Borough of Croydon in 2018 for services to sport and continues to be enthused to help inspire a generation through education by ‘giving back’ and sharing her knowledge and experience with young people aspiring to achieve their goals.

Donna is now an international speaker, strategist, and charity ambassador, and dedicates much of her time to working in Business, Sport, and the charity sector to inspire and embed inclusive and diverse cultures.

2018 Freewoman of the Borough

Her journey within these spheres has inspired her to share her story which coupled with her warm and charismatic style captivate diverse audiences from a young aspiring athlete to a CEO who is driving for organisational success to ‘believe and achieve’.

The Olympic and Paralympic values of Respect, Excellence, Friendship, Courage, Inspiration, Determination and Equality, helped shape Donna’s career from athlete to businesswoman. These values were prevalent through the highs and the lows of her athletic career and resonate in her business career and in everyday life, which make her keynotes versatile and relevant.

Her stories are filled with drive, resilience and compassion and she has the ability to tailor make her speeches to highlight key messages to suit the client, taking them on a roller coaster of emotions filled with motivation, elation and inspiration.

"Donna was fantastic at our Speech Day event, struck just the right chord with the parents and children. She was friendly and personable, willing to chat to people. Thanks very much for organising."

“Donna was fantastic yesterday. She was excellent with both the children and the parents and really made the day special for them.”

“Donna was amazing - best one we have ever had. She was so lovely - got stuck in with the girls and also ran against them. Awesome. She spoke brilliantly. Loved having her, so thank you!!”

“Donna Fraser was brilliant. She made a fantastic contribution to our event with a really interesting account of her trials and tribulations in competitive athletics. Pupils were really inspired by her story and she delivered an important message to the young people about preparation and self belief.

Donna provided excellent communication prior to the event and undertook the role with great professionalism. She was extremely friendly and approachable and very willing to take part in a variety of roles on the day. She gave an inspiring presentation to the audience, posed for numerous photographs, led a Q&A session with smaller groups and finally spent time signing autographs.

I have received very positive feedback from staff, pupils and invited guests from district and county councils who thoroughly enjoyed the event.”