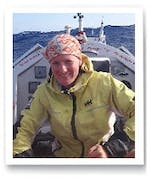 Debbie Beadle is an adventurer and a children’s rights activist. She combines these two passions to raise awareness about children’s rights abuses in a positive way which children relate to. Her latest adventure saw Debbie captain "Row For Freedom", the first female team of five and fastest females to row 3000 miles unaided, across the Atlantic Ocean. The team achieved two World Records.

Never having rowed before, Debbie learnt how to row and survive at sea leading the team across the ocean. Currently working for ECPAT UK (End Child Prostitution, Pornography and Trafficking) as the Youth Programme Coordinator, she supports child victims in the UK and uses her experiences and work to raise awareness about child trafficking and children’s rights in schools.

Debbie’s presentation and/or workshop encourages children to follow their dreams and became advocates for children less fortunate then themselves. "Row For Freedom" was more than a world record attempt, it was a campaign to encourage people to take action about the terrible injustice of child trafficking and saw the team meet the Prime Minister at No. 10, invited to the European Parliament and gain National TV Coverage. Through the session pupils will be inspired through the adventure of Row For Freedom, hearing about all the challenges we faced, how we overcame adversity for what we believe in, gain a better understanding of child trafficking and children’s rights in the UK and what can be done about it.

"Debbie was such an engaging and dynamic speaker. The pupils were so inspired and motivated. it is so important for the children to understand this issue. We have brothels right here in Enfield and there may be children exploited within them, being visited by people we know. We need to talk about this issue to everyone so that they are aware and start to think."