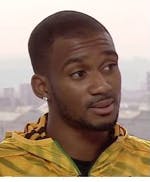 The rocky road to success

Daniel is currently an international Triple Jump athlete having come up through the ranks competing for both Great Britain and his parent's country of origin, Jamaica. Daniel's story however, is not so straight forward. He also manages his own sports agency, London Reign Sports, bringing popular culture to sport and connecting with youth in particular, as he offers an exciting, relatable and daring story of his journey to the top.

At the age of 15, Daniel was a late starter to athletics but quickly progressed to the become one of the best the country has seen, enjoying national successes throughout the youth years. Being a back to back National Schools’ champion and earning himself an invite to the Olympic trials whilst still under 20 years old, he was regarded as one of the prospects for London 2012. He explains how life was good, he was on top of things both academically and athletically and it was all due to three simple traits that all successful people share: discipline, tenacity and determination.

However in 2007, things took a turn as Daniel was accused, along with 4 others, of being involved in a robbery and was promptly arrested; losing his prospective scholarship to America and taken out of competitions for that season. This left Lewis facing hard decisions, in an attempt to avoid the downward spiral that is so easy to fall into. He was, a year later, found not guilty of this offence and although a massive relief, he had lost a key part of his developmental phase and found his previous plans derailed.

In his speeches he communicates how easy it can be to lose it all in a flash and to never take success for granted. It was his nonchalant nature that allowed him to take an unnecessary risk in being around the wrong people.

After four years of no medals it was in 2014 that Daniel ended the indoor season ranked 3rd in Britain, and was called-up to represent England as a senior for the first time. He was later selected to compete at the 2014 Commonwealth Games, representing Jamaica due to the competition having no Team GB. Here he successfully negotiated his way safely through to the final and finished in 7th place, the highest of any Caribbean jumper.

"An excellent, engaging and FUN talk for our whole school - he even got our staff involved on the exercise."

"Daniel's visit to our school really got the kids fired-up! They are absolutely buzzing off his story and all have a glint in their eye for their futures."

"Daniel Lewis came in his full kit and spoke to our kids on our careers day. It was a lovely change from the usual, he had the kids engaged and inspired with his demonstrations and tips for success."