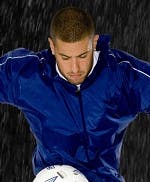 With his unbelievable skills, Colin has stunned and captivated crowds of all ages around the world. His talent with a football has led him to work alongside the biggest names in world football.

Interactive live performances are Colin’s speciality, setting him apart from other football freestylers. His reputation as a showcase entertainer is exemplary and has become the freestyle of choice for major sponsors, brands, promotions and high profile events.

Born in London, Colin Nell was spotted in 2000 by Nike Executives whilst displaying his array of tricks in a major Nike promotion at Wembley Stadium which attracted over 30,000 contestants.

Since then, Colin Nell has enjoyed an outstanding career as a professional football freestyler.

Combining his charismatic personality with an interactive freestyle show has made Colin one of Europe’s top sports entertainers who prides himself on being able to develop performances, workshop sessions and promotions to meet your entertainment / promotional needs and expectations.

"Just a quick thank you for a brilliant morning of talk and activities. The rest of the staff, and of course, the children had an inspirational and thoroughly enjoyable time. As predicted, they were all practising their football skills in the playground at lunchtime!"

"As a school community we are committed to the values we wish to instill in our students: we encourage and develop responsibility, leadership, team work, integrity, respect and resilience. We expect the highest standards in behavior and in attitudes to learning, and we support each and every child in their quests to achieve their very best. Working alongside Ralph Henderson and Colin Nell at Appetitio has enhanced those core values and helped inspire and motivate our students based on sporting excellence with past and current greats. Not only have they installed the Olympic values and re energized the students but they have also helped raise the profile of William Edwards school and students by raising funds for school and community projects. We wish them all the luck in the near future and look forward to welcoming them back again."

"Colin was inspirational, funny and dazzled the boys with his skills and his charm. A great show and speech which transcended football freestyle to focus on aspirations and how to be successful in a fun and informative way."

"Colin was absolutely fantastic, he arrived early, listened to what we wanted from him and delivered a fantastic motivational speech and then wowed the crowd with his football freestyle skills, we would certainly recommend him as a speaker and we would love to use him at another event."