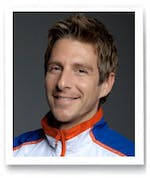 The early years: Chris would love to say that he was great at everything he turned his hand to as a youngster, and would love it even more if he could say that he was especially talented at swimming – but neither are true. Whilst he was never as good as some of his friends and school mates at sports it didn’t stop him loving sport and enjoy giving it his all.

The Dream: One of Chris’s earliest memories as a child was learning to swim and he felt that from a very young age that swimming was going to be a huge part of his life. After learning to swim, Chris was keen to move his swimming skills on further and so joined a swimming club. Little did he know, that it was here that Chris was to meet some of the most amazing people that would help him to embark on a dream and a journey to chase Olympic Gold.

The Journey: Always felling a tad different from his friends, Chris was mesmerised and inspired by the Olympic Games. Missing out on junior Great Britain representations along the way and never being identified as gifted or talented at a young age, meant that funding this dream was down to him and his family support. And coming from a family where money wasn’t always readily available makes his story even more remarkable. Realising his Olympic dream came in 2004 & 2008 as Chris represented Team GB in both Athens & Beijing Olympics, carving out a career representing Great Britain for almost 10 years.

The here and now: Chris uses his very unique and exciting story of ‘an average guy with a big dream’ to inspire and enthuse others to follow their own inspiration. Giving anyone who listens the confidence to step out of their crowd and to explore their true potential. Chris firmly believes that by making very key and important decisions along your journey will take you ever closer to your ultimate dream and goal.

Chris’s talk will leave any young person feeling they too are entitled to chase their innermost ambitions. ‘If you don’t go after your dreams... someone else will...’

"Absolutely brilliant!!! Would highly recommend him. Such a great guy and a thoroughly inspiring story encouraging children to be the best they can be. The motto at WIS!!"

"Chris visited Heaton Manor School and over the course of the day, he delivered motivational speeches to all year groups, outlining his thoughts on determination, success and what it takes to achieve. The event was a massive success, with all year groups and staff extremely impressed by the presentation content and delivery. Chris altered the presentation depending on the year group he was presenting to, which ensured every pupil could take something away from the event."

"I think he is great, I know how to cut the field now! I enjoyed him"

"It was very inspiring because he made me push myself"

"We invited Chris to work with our team to help to inspire the young people in the Macclesfield School Sport Partnership... the young people thoroughly enjoyed Chris's presentation and still talk about it... a great day was had by all and the young people (and staff) were thrilled to meet such an inspirational Olympic athlete. Thank you Chris and we look forward to working with you in the future..."