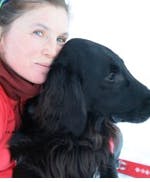 Caroline was first enticed into the winter wonderland when she embarked on a ski trip to the Alps at the age of 10. Since then, she has spent every possible opportunity to return to the mountains and their snowy folds, working as a ski rep for PGL, then ski instructing children's classes in Austria. She even had a quick flurry in the world of freestyle skiing, training in the disciplines of both ski ballet and aerials.

She soon realized after her Bachelors degree in German and Spanish that she needed to search for 'a serious job'. Thwarting her passion to work in the snow she tried a variety of careers from guiding and interpreting to working as a jilaroo on a cattle station out in the bush in Australia to finding herself being drawn gradually back up to altitude. After some soul searching Caroline realized that she held a deep desire to do something which had meaning: helping others outdoors.

Upon this realization Caroline channeled her energies into becoming a ski patroller. Her proficiency on skis helped her to progress quickly and made learning a pleasure, completing her first training course in Thredbo in the Australian Alps. Upon her return to Europe she soon found that her diplomas with the kangaroos were not going to stand up against 'le coq français!', and that the qualification would not be recognised in France.

It's a good thing Caroline thrives on challenge! In 2007 she embarked on the long and complicated journey starting with the ski test until the final examinations to become a French ski patroller or 'pisteur secouriste 1er degré, and only 4 years later attended the Ecole National de Ski et d'Alpinisme (Chamonix) in 2011 to gain the pisteur secouriste 2éme degré.

Furthering her knowledge she continued to take courses including 'Observateur NivoMétéo' with Météo France to study weather systems and snow environment along with the qualification to detonate potential snow masses as an 'Artificier' with the ANENA.
However the crème de la crème of moments has to be when Caroline entered the French Fire and Rescue specialized Mountain Rescue unit to become a Search and Rescue dog handler in 2010 with Fjord her French Flat Coated Retriever.

Passionate about imparting her knowledge to keep children safe in the snow, with the help of Fjord, she delivers a talk that will capture the imagination of her young audience, teaching the essentials about the mountain environment and giving insight into the fascinating life of an avalanche search and rescue dog whilst hearing all about his adventures.

Caroline also offers an interactive workshop to help familiarize students with specialized mountain equipment whilst at the same time guiding them through the techniques used for searching those caught in an avalanche. 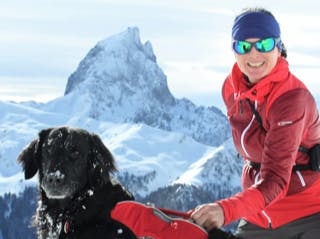 "The young people loved meeting Fjord. Caroline is friendly and passionate about her work, it is always nice to show young people what the industry they are newly into is all about."

"Caroline doesn't need much introduction, her talk is very interesting, everyone loves it, and there's a lovely search and rescue dog, called Fjord!"

"Meeting Caroline and Fjord in Gourette is a highlight for the snow classes, especially learning about the work ski patrol do and watching a search and rescue dog demo."