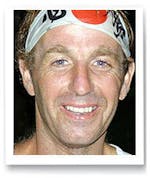 Before qualifying as a Primary School Teacher, Bob Brown was one of the world’s top sportsman. Amongst his many achievements, he broke the World Record in the World’s longest triathlon (the Deca-Ironman – a 24 mile swim, 1120 mile cycle and a 262 mile run) and became the only ever Briton to win the 3100 mile Trans-USA running race from Los Angeles to New York.

Bob was also the first Briton to run across Australia and set a World Record for running across the European Union.

As a teacher, he has transferred his passion for sport into helping children to not only excel but develop a life- long passion for sport and being physically active. Bob also demonstrates the importance sport has in raising confidence and self-esteem and how that translates into progress in the classroom.

He has talked to multi-national corporations, national sporting teams (such as the Great Britain Rugby League Team) and schools, colleges and teaching conferences all around the world.

His talks have been described as ‘truly inspirational’.

"Bob's talk inspired the children at our triathlon academy to achieve exceptional results at the championships. He also encouraged and supported two of our six form girls to become the UK's youngest females to complete an ironman distance race. An incredible motivator of children."

"When Bob spoke to us at a primary schools P.E Conference I was amazed at how he subtly and quietly delivered truly powerful messages about aspiration, belief and commitment to achieve, not only in sport, but in all areas of life."

"It takes a lot to impress professional sportsmen. But the whole of the Great Britain Rugby League squad will remember the day Bob Brown came to talk to them."

"Bob's session with our Gifted & Talented group was packed with useful advice, but this was over-powered by the theme that anything is possible in life if you have belief in yourself and work hard."