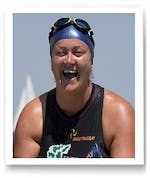 Anna Wardley is one of just four people in history to have completed a non-stop swim around the Isle of Wight, completing the gruelling 60-mile swim in 26 hours and 33 minutes. It was the culmination of her Five Island Swim Challenge in 2013, which included a 41-mile swim around Jersey in the Channel Islands and a world record swim around Portsea Island, home to the city of Portsmouth.

Since taking up open water swimming in 2007, Anna has raised in excess of £100,000 for causes close to her heart. One of her chosen charities is the Samaritans in memory of her dad, who she lost to suicide when she was nine years old. She now works to promote positive mental health and wellbeing, and in 2019 was awarded a Churchill Fellowship to carry out international research to improve the support for children who lose a parent to suicide.

After suffering with depression and anxiety herself, Anna took up open water swimming to improve her mental health and overall wellbeing. That decision transformed her life and she named Inspirational Woman of the Year 2013 in the Johnston Press South Awards in recognition of her ‘incredible swimming achievements and outstanding efforts raising money for charity’.

As someone who struggled with sport at school, Anna took up swimming aged 31 after reading about a Channel swim in a newspaper and set her sights on the same challenge. She taught herself front crawl at her local pool and made her first Channel attempt the following year. She was pulled out after 14 and a half hours, a couple of miles from the French coast, and was hospitalised with hypothermia, shock and exhaustion. After a year out of the water, she returned to face her demons two years later and made it to France in 21 hours and 20 minutes despite getting badly stung by jellyfish and swimming through dense fog and pitch darkness. She was awarded the Channel Swimming Association’s Greatest Feat of Endurance Trophy for the crossing.

Anna has also sailed 36,000 miles as part of a 12-strong international crew in the Clipper Round the World Yacht Race, ran the London Marathon and tackled the Big Red Balls as a contestant on Total Wipeout.

To swim through pain and fear, Anna recites Muhammad Ali’s words: ‘Don’t quit. Suffer now and live the rest of your life as a champion.’ Anna has a natural ability to engage with young people, and her message that anything is possible if you set your mind on it and work hard at it has a powerful impact on students from all backgrounds.

She talks about overcoming adversity, developing resilience, reframing failure and maintaining a positive mindset to give young people the tools they need to face challenges in uncertain times. Anna is an inspiring role model and delivers her presentations with passion, energy and humour.

"Thank you so much for yesterday! Your talk was wonderful and just exactly what I was after- it really inspired the students and got them in the mood for the rest of the day perfectly. Once again thanks so much for your time!"

"Really positive feedback for Anna and great message about never giving up!"

''I recall that we first met when you kindly accepted our invitation to come along to “Talk to our Girls and Inspire them” and afterwards present prizes to the girls at Wykeham House School. I was so inspired by your talk and found it, like the rest of the audience, quite riveting. I could hardly believe the amount and type of training that you had to do to prepare yourself for your “endurance” swimming!

I then invited you along to Fareham Meon Rotary to give a talk on your Five Island Swim Challenge, again, the members didn’t stop talking about you for months after. Even now they are reminded by your achievements as shown and reported on television.

You are without doubt an inspiration to us all, and your energies and dedication are second to none! Your achievements in raising a mammoth £56,000 is tremendous, outstanding and you deserve the greatest accolade that we as a country can give you. All the very best''

"Having asked Anna to open our Olympics Sports Day, which due to the weather conditions was cancelled, we were thrilled that she could come and talk to all our children about her inspirational challenge to swim 5 Islands. She spoke to both our preprep (4-7) and prep (8-11) departments about her adventures, complete with lucky duck! Anna pitched her presentation perfectly for both age ranges, the children were interested, impressed and asked some good questions. With swimming an invaluable skill for every child, being able to introduce them all to such a warm, friendly and inspirational speaker really brought what she has achieved to life. This combined with her fundraising achievements, I would definitely recommend Anna as a speaker in any school environment, as a positive, professional, inspirational female role model for us all. Thanks Anna."

''Anna gave us an amazing insight into her mind blowing challenges. She is a truly unique, inspirational, and determined lady who proves you can succeed in anything if you put your mind and body to it!''

“Anna spoke to the Year 11 students at St Swithun’s when they needed some motivation following the announcement of the next lockdown. Anna did a brilliant job of telling her incredible story whilst making it relatable and inspiring to our students. She made her astounding achievements relevant to our girls and their goals and aims and certainly motivated them into thinking that they can achieve anything that they set their minds on. She especially helped the girls to make sense of tough moments in life and how they can be utilised to build strength moving forwards. Anna was exceptionally engaging, enthusiastic and inspiring”