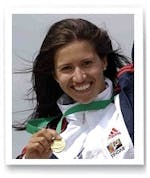 Anna is best known as Britain’s most successful ever female canoeist.

However, since retiring from the world of elite sport in 2009, she co-founded Beyond the Barriers, a company that gives people the tools to perform at their best, be it in sport, business or life. Anna also works as a commentator for BBC and Eurosport.

In addition to this Anna continues to inspire audiences with anecdotes from the World Championships and Olympic Games, hers is really tale of triumph over adversity.

In April 2003 Anna was diagnosed with chronic fatigue syndrome and was told by medical experts she might never race again. Despite being told that there was no solution, Anna’s ‘never give up’ attitude enabled her to make a full recovery. In 2005 she signalled a miraculous return to fitness by regaining her status as the World’s leading marathon canoeist at the Marathon Racing World Championships in Perth, Australia.

Between 2005 and 2007 she went on to win a hat-trick of three World titles in a row. Throughout her career, Anna won a staggering 11 World and European Championship medals. Anna’s achievements were recognised at the Sunday Times Sports Woman of the Year Awards, where she won the 2005 Champions Award. She was then awarded an MBE in the 2010 New Year’s honours list for her services to sport.

Anna is a highly accomplished speaker; she is entertaining, direct and on target. She has a passionate belief that every individual has a talent and an ability to achieve beyond their imagination. She’s on a mission to inspire and equip people to think differently, to feel empowered and to maximise results in any area of life. Anna’s story of success in the face of adversity gives young people hope, strength and the understanding that anything really is possible.

The audience walks away with the realisation that there are no limits if you are prepared to work hard, choose your attitude, learn from your mistakes and never give up. Anna’s exciting journey is not only inspiring but it also highlights the success strategies that helped her rise to the top; and more importantly how these strategies can be applied to anyone in any situation.

"The video footage summed up brilliantly your anecdotes and provided an entertaining insight into the reality of professional sport. When you were working with groups during the practical sessions you related brilliantly to the students and kept them motivated and interested for the duration of the day. Several teachers commented on your ability to engage with the audience and draw them into your stories. The students commented on how friendly you were when you were working with them and how although you are a “superstar” you seemed really nice and normal, very easy to talk to! Thank you so much for your help on this day, it made a huge difference to the success of the event."

“Anna was our main Guest of Honour at the official opening of our new school. She came as a very late replacement. However, we can truly say that this was good fortune on our part. Anna was excellent and extremely co-operative to all of our requests. Her address to our students and staff was truly inspirational, they were totally enthralled by her. After the event, many of our staff and other guests remarked how wonderful she was, one of the best speeches they had heard and pitching her words at exactly the right level for the students. We had a tremendous day with Anna making a major contribution to its success.”