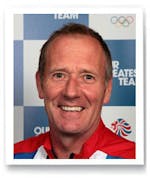 Walking the tightrope.....triumph and despair, my experience of life in two high performing, contrasting roles, as a Police marksman and International Sportsman.

For Andy Halliday, the opportunity to manage the GB Men's Olympic hockey team in 2012 was the pinnacle of an enthralling journey. After a career spanning three decades policing London and balancing the demands of international sport, he is able to reflect on a wealth of experience at the sharp end of life.

Whether it is the crime frontline of eighties Britain or the fight against terrorism in the nineties, he has a story to tell. With such despair at the bombings of July 2005 contrasting the joys of July 2012, he has witnessed and experienced, first hand, the very worst and the very best of life in our capital city.

From International sport to high performing specialist police teams, he now draws on some incredible experiences and talks openly of life in an elite team environment. "You've got to experience the lows to enable the highs". Its not just about success, his story encapsulates joy, humour and despair, and pretty much everything in between.

His account is from true life, the high pressure of decision making, dealing with stress, developing resilience to deal with high performance, both with Olympic athletes and in a world apart, where the wrong decision can be catastrophic.

Ironically, the events of the two careers have merged on several occasions, most recently, denying him a place with Team GB hockey at the Rio Olympics.

He readily admits he was not blessed as a "natural" for success. Mindset and humility have played a major part in helping him achieve.

However, he is a man who never forgets his upbringing and the grass roots of the sport he has enjoyed playing for nearly 45 years. He is back coaching at his former club, St Albans. An ambassador for disability hockey, hockey4heroes and the Director of hockey for the FRE Flyers, an incredible set of Newham youngsters who took up hockey as part of the legacy of the 2012 Olympics.

He talks candidly of his experiences, can adapt his subject matter to suit his audience.

Whether it is Inspiration, Sport, Policing, Lifestyle, Mindset, Resilience, his story will cover all.

"Andy has delivered an evening talk to our parents and pupils where he has shared his experiences from his very successful working and sporting life. The key principles discussed were taking ourselves out of our comfort zones and challenging ourselves; the choices we are faced with in terms of commitment; and decision making when responding to difficult and testing situations quickly.

The vibrancy in the coaching sessions and the evening talk was palpable with a totally engaged audience in both settings. This is down to Andy’s knowledge and real-life experiences, his charisma and humour and the engaged and inclusive nature of his delivery. I can’t recommend Andy highly enough and we, at LMS, will certainly be working with Andy again."

"All went well regarding Andy, he spoke well and got the points which I had asked him to get across"

"Andy Halliday GB Olympic Hockey Coach visited Queens’ School to give an inspirational talk to Year 11 pupils on dealing with pressure, overcoming barriers, stepping out of your comfort zone and learning from failure being a key to success in whatever you do in life! Andy talked passionately and emotionally about his career in the armed forces and as a GB coach. Most interestingly the similarities in dealing with difficult situations and how you can learn to deal with these using the same training given to him in the armed forces which he used with the GB Hockey team in 2012 London games. The staff and the pupils learnt some of the coping strategies Andy had used in both his careers, which can work in any situation, and that stepping out of your comfort zone and learning from failure is how we learn and develop."

"We approached Andy, as a former student, to take part in our Engaging Minds series of lectures to our Sixth Form students. Andy gave a fantastic, inspiring presentation on his wealth of experience being on the front line of the Police armed response unit as part of SO19 and more recently as Great Britain Hockey team manager during the London 2012 Olympics. He managed to engage our students through his excellent speech, videos, images and by taking questions from the floor. The feedback from the students was excellent and we were fortunate that he also accepted our invitation to present at the Senior Prize giving evening later that year which really made the event an overwhelming success with his speech to parents and students."

“I have the privilege of working with and listening to some of the very best speakers around. Andy’s talk on leadership, illustrated with real lived experiences from working at the top of two very pressurised but different worlds, which he skillfully braided into one captivating presentation is among the best I have ever heard. Superb!”

"Andy to addressed our most able students at our annual awards evening. Andy used his experience of working with elite athletes to share ideas, strategies and techniques that were most appropriate. His presentation had something for everyone in the audience. He was engaging, motivating and light hearted in a well paced and enthusiastic manner. He was a real tonic from presentations we have seen in the past as he was able to direct a different perspective as to what should matter and priorities for the future. Feedback from students, parents and staff was equally positive, thanks Andy"