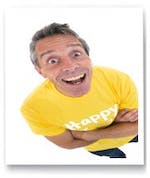 The Art of Being Brilliant!

Described by his mother as ‘the best writer of his generation’, Andy is a best-selling author who also specialises in writing his own biography so these next few words should be taken with a pinch of salt (or, indeed, lime and Tequila)

Andy is a qualified teacher, wellbeing expert and ‘recovering academic’. His Loughborough University PhD was 12 years in the making and he revels in the irony that his thesis on human flourishing actually ended up making him miserable.

The reward for grinding out his PhD is that Andy gets to call himself a ‘Doctor of Happiness’. Don’t worry, he’s socially aware enough to understand that it’s a terribly cheesy title, but a notch above the socially unacceptable alternative, ‘Doctor Feelgood’.

In a nutshell, Andy is exactly the opposite of all the other doctors you’ve ever encountered. While they’ve been trained to work out what’s wrong with you, Andy is focused on the total opposite; what’s right with you, what makes you come alive and how can you be at your best more often.

The good doctor is lucky enough to work with some very large businesses, including DHL, Kelloggs, Hewlett Packard, Astra Zeneca, Lego, Nationwide and UEFA. Recently, he has tailored his workshops to meet the needs of children and teachers and now delivers to audiences from age 8 upwards!

Andy’s books are frequently on the best-sellers list. ‘The Art of Being Brilliant’, ‘Shine’, ‘The Little Book of Emotional Intelligence’ and ‘Zest’ have all topped the personal development charts. ‘Happiness Route Map’ was nominated as The Independent’s best self-help book of the year. He’s not done yet; 2020 sees the publication of ‘How to be a Well Being’ and ‘A Girl’s Guide to Being Fearless’.

In a bizarre leap of quantum reality, Andy is also a best-selling children’s author. His ‘Spy Dog’ series has sold in excess of a million copies worldwide. He’s not quite sure how that happened, but he promises it’s true. He is able to console himself in the knowledge that you might not have heard of him but your children and grandchildren surely have.

Andy was born in the same vintage year that England won the football world cup. He has pet pigs and has set up the hugely successful 2%ers club, the UK’s first, foremost and...err...only society for happy people.

His ambition is to be able to surf, brilliantly!

"I just wanted to thank you for the wonderful input that you made to the conference last week. The heads were literally "buzzing" … and I am sure that you have helped to shape the future development of education in Blackpool".

"All Heads were thrilled with Andy’s session on the Friday morning. Many said that it’s the best speaker we’ve had on any of our Friday sessions which is high praise indeed".

"Inspiring stuff and very thoughtful. Practical suggestions. Great to reflect on life – a thoroughly inspiring morning delivered with humour and life stories….Absolutely brilliant, should happen in every school."