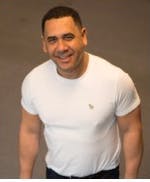 Vinny Gee had a most difficult introduction to the real world. Born into a family that was always in financial difficulty and with an absentee father he became surplus to requirements at the age of 14 and was promptly put out on to the streets of Nottingham. Hardly surprising when you consider that he was brought up on a diet of physical and mental abuse and levels of neglect that wouldn’t look out of place in the Victorian era. However, he became a quick learner.


Bullied at school, he developed effective coping strategies, though this did not stop him being expelled and this was the excuse his mother needed to eject him from the family home. A life on the streets beckoned and with that came the need to survive by whatever means were available. This generally involved petty theft and rubbing shoulders with some very dubious characters.

Vinny found himself in and out of work and eventually he became involved with drugs. The almost inevitable happened and he soon became a guest of Her Majesty. He realised that he needed to get off this particular lifestyle train and when he had finished his sentence he was given “words of encouragement” by a fellow inmate – a lifer called George. Vinny was told that prison was not the life for him and that if he ever returned to prison then George would end his life. An extreme example of being cruel to be kind perhaps… but the message got through. By this time Vinny also had a young family to support and his wife also gave him an ultimatum; stop the drugs or get out. He took the hint and after a string of jobs he found his real vocation – personal training.

Rest assured that when Vinny Gee decides to do something he gives it his all. So it proved as he became the Number One Elite Personal Trainer with a well-known UK fitness organisation. So successful was he that he decided to open his own successful gym in Sheffield, where he delivers bespoke 121 personal training to his clients. Needless to say his appointment book is full. Vinny is also a regular on Channel 4’s Obsessive Compulsive Cleaners and other reality TV shows and he is often recognised in the street by the general public.

He is also a public speaker and often gives talks at schools, charitable organisations and fund-raising events. His key message is that despite whatever life throws at you, you can overcome and succeed - just as he has done himself. He is a powerful inspiration to us all.

"We recently hired Vincent for our Year 11 Personal Development Day with great success. Vincent delivered an honest, inspiring and thought provoking 45 minute assembly in which the students were enthralled. Vincent’s hard-hitting message was delivered with professionalism and personality. He was confident interacting with the students and was thoroughly engaging. A huge thank you Vincent for helping make or Personal Development Day a success."

"The Sixth Form of Mount St Mary's College were inspired and enlightened in equal measure by Mr Vincent Gee's life story. Overcoming adversity, succeeding in the face of hardship and motivating others to make life changing self-improvements enthused the attendees to the Bellarmine Society. We look forward to Mr Gee's next visit."

''Vincent’s presentation to our Year 9’s was touching, emotional and heartfelt. His powerful story literally reduced some of our students to tears and prompted others to think seriously about their own lives. This has had a huge impact on many of our students and is something that will remain with them for a long time. It is rare that students have the opportunity to hear a story like Vincent’s first hand, a fantastic opportunity for both staff and students.''

''Vinny came to see me to inform me he was the Inspirational speaker for Mosaic; a company with whom we were working with along with our business Partners Carillion, to Mentor our Y10 students who were C/D border line. My first thoughts were wow! This guy impresses me; he has character and presence in abundance. This was born out by captivating an audience of Y10’s who were impressed so much that they were in awe of him. He was very honest about his experiences through life and did not lie to the students when asked difficult question about his past. I would recommend this very worthwhile experience to any school or establishment wishing to engage young persons or adults. Vinny is an inspiration character with an inspirational story. He has also offered to mentor some of our most difficult students; this is something we would be willing to look into.''

"Vinny Gee’s journey of success by overcoming adversity and bullying is truly inspiring. Against all the odds, Vinny’s story of turmoil and retribution captures the hearts of those that hear it and listeners cannot help but be engaged."