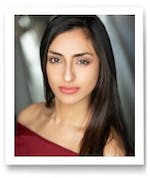 Sarah has explored remote parts of the world, surviving jungles, deserts, mountains and caves to live with indigenous and remote tribes documenting important human and environmental stories with impact whilst becoming a pioneering face of exploration.

Her first film, ‘Amazon Souls’, where she hunted and gathered with the Huaorani tribe and was made a real life Amazon Warrior Queen advocate for preserving the jungle premiered at Cannes Film Festival and is distributed worldwide. Sarah has won many awards including the Spirit of Adventure Award by Captain Scott Society, was highlighted by The Guardian newspaper as The World’s Top 17 trailblazer, is endorsed by Bear Grylls, David Attenborough, Jane Goodall and Hollywood Actor Kevin Hart. She is the Host of Spaced Out!, a podcast and TV series about the Space industry interviewing leading figures from investors to astronauts to educate the masses about the inner workings of the business behind Space ventures, which has also featured on Space Channel.

Her most recent interview include NASA’s Chief Scientists about NASA’s Scientific Breakthroughs and the Mars Perseverance Rover missions. Sarah was chosen to become a Space Hero Insider to represent a cohort sending the first citizen in space as part of the Space Hero TV Show, she is also a running dearMoon Candidate, a contestant chosen out of 1 million applicants to be sent to the Moon with SpaceX’s Starship. Sarah was made a Yuri’s Night Ambassador by Virgin Galactic Astronaut Loretta Whitesides, and kickstarted into the space industry by leading Space Investor, Dylan Taylor.

She is a valuable contributor of Frank White’s (Author of The Overview Effect) Overview Round Table to discuss important topics about humanity's relationship and preparations for becoming a spacefaring civilisation. Besides being the leading international face and Communicator of Space Media, Sarah has a start-up developing sustainable propulsion for an eVTOL concept to eliminate air pollution and aims to inspire young people through her role as a STEM Ambassador.

Watch Sarah in action on her YouTube channel here.

"It was a great session! Sarah's PPT was really engaging and the questions at the end showed how much the students gained from the talk. I'd definitely recommend her as a speaker."

“Sarah it was a wonderful honour having you at our Nari Diganta International Women’s day event on 8 March 2015 as a speaker and participant on our panel of successful British Bengali women. The team at Nari diganta and audience most appreciated your work in that it brought home to women your ability to break free of stereotypical, sexual, cultural, religious bigotry to explore adventurously and achieve success as a woman. We would be pleased to have your presence again in order to empower and encourage women to do the same.”

“Sarah came to visit our sixth form in October to talk about and screen her Amazon documentary. The film completely surpassed my already high expectations – absorbing, heartfelt and humorous. A class act of documentary film-making. Sarah has engaging, warm and perhaps above all as interested in her audience as she was interesting. The time she spent with a group of students at lunch after the lecture – the most popular lunch of the lecture series’ in the last 2 years – and the effort she made to question and advise each of them is a testament to her passion for people. I think she left all the girls better informed and more inspired than before her lecture.”

"Sarah Begum is such a passion driven, engaging speaker we were fortunate to have our TEDxAccra stage. Her talk, 'Dreams are made of Action' was one of the best talks that was presented on the day. Her passion for environmental issues was clearly defined and her session was very educative. She's the best i've ever worked with."

"Sarah was one of the keynote speakers at our 2017 Rotary District Conference as part of the “Spirit of Adventure” plenary session and did not disappoint. She engaged and enthralled the audience and her tale did not just fit in with the theme of the session but also some of the ideals of Rotary and that of protecting our environment. Sarah’s passion and enthusiasm about the people she has encountered and the places she has been to was clear to see, as was her concerns for them which struck a chord with those present at her talk. I am sure following her talk, Rotarians in our district would be willing to work with such a like minded person as Sarah on some of her future projects"

"Sarah was great, and the girls have already asked to have her back!"