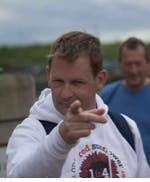 Mike McGrother, AKA The Wild Rover, is one of the UK's most in demand performers and speakers. Armed with guitar, a wealth of experience and knowledge education and community development, Mike is at home in the classroom, the assembly hall, at conferences or events that need a lively, inspirational and passionate twist.

Mike has been working with young people for the past 30 years both inside and beyond the classroom. As such, he has developed a vast amount of experiences and approaches that have transformed the learning of children and adults alike.

Mike has worked extensively with disengaged and NEET young people resulting in a Point of Light Award from the Prime Minister. Turning previously ‘switched off’ learners into mentors, community champions and even magicians, Mike inspires the most reluctant learner to reassess their pathway and take a lead in their own destiny.

He talks honestly and emotively about his own life story - battling against depression and finding a new life following a previous long held vocation to the Priesthood. He explores themes of ‘inheritance’, ‘opportunity’ and ‘sliding doors’ - linking stories of his remarkable, epic historical based walks from his Teesside home to and from Ireland, (highlighting his Irish descended family as 'refugees' and the metaphor of walking the walk as well as talking the talk).

Described as a 'community engineer' and 'a cross between Bob Mortimer and Billy Bragg', Mike has found ways to create whole school choirs; develop collective approaches to ‘musicking’ and can create a memorable anthem for your school or academy in one day!

"He is a great speaker and our pupils/parents could definitely resonate with him, we had great feedback after the event. He is a lot different to the types of speaker we would normally have but it paid off."

"I told you the day we met that I was going to try to get you to Detroit... Honestly, you were a goddamn gust of fresh air and SO MANY people have told me how impressed they were with you and your work. As for me, I had no idea you were so funny. You had me cracking up. And I don't laugh for everyone. Also, you're an absolute natural at public speaking."

"You're a real credit to our area Mike, bringing Teessider's stories to life with sensitivity and style, enabling people to feel part of the heritage and tradition that binds us"